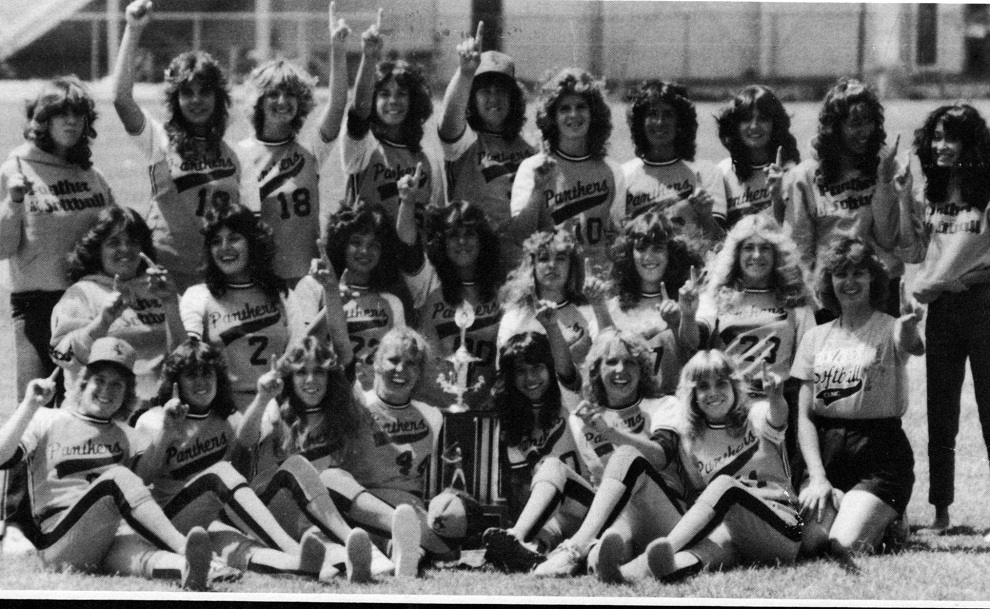 May 26, 1984 was an historic day in the annals of Antioch prep sports when the lady Panthers brought home the very first North Coast Section Championship in softball for Antioch High School. AHS also captured the boys’ NCS title a few hours earlier, making Antioch High the first school in NCS history to have both its boys and girls teams emerge as champions on the same day.

In the final game lead-up to NCS, played against San Ramon High, Karen Christianson’s clutch 2-out, 2-run single in the sixth inning to right center brought in Andy Telford and Tabitha Roth, giving the Panthers a 2-0 victory over San Ramon that sent the team to the NCS championship against Montgomery. The Panthers found a formidable opponent in the Santa Rosa team, which came into the NCS play-offs with a 23-3 record. Sophomore pinch-runner Kendra Mattson scored the winning run to clinch the championship. Pitcher Dawn Hilgenberg allowed only two runs in the four-game NCS series.

Mt. Diablo High was responsible for the lady Panthers’ only Diablo Valley Athletic League loss, after a 21-game winning streak, even though the game was a no-hitter for pitcher Hilgenberg. The only run was unearned and occurred in the bottom of the seventh inning. The season did have some sweet revenge, when the Panthers’ second match-up against the Red Devils resulted in a one-hit, 5-0 shutout by Hilgenberg that clinched the league championship.

The team, co-captained by Joann Mills and Karen Christianson, racked up 123 runs throughout the season, holding their opponents to a total of 34. The Panther girls led the league in stolen bases and having the fewest errors.

Hilgenberg, the flame-throwing right hand senior, had an astounding .94 ERA in 126 innings in an overall 18-1 season and 11-1 DVAL record. She was also named Player of the Year for both the DVAL and East Bay, chosen by the East Bay Prep Writers Association, as well as being honored by the Big “C” Athletic Club as its Female Athlete of the Year.

In a Daily Ledger pre-season article, coach Andria Edwards expressed some worry about having an inexperienced squad, made of mostly sophomores and juniors, and anticipated having “to definitely work on our hitting.” The team’s success went beyond what many would have predicted. The girls put away their first 11 opponents, holding most teams to one or two runs a game. Coach Edwards was honored as the DVAL Coach of the Year.

The extraordinary teamwork and camaraderie developed among the veteran and rookie players propelled the girls to the best record in the history of Antioch High. Helping cement their close relationship were several shared rituals. The girls fondly recall singing along with a mix-tape of songs featuring pop hits “Footloose” and “Eye of the Tiger” played at full volume on the bus rides to every away game. Andy Telford recalls that she used to kiss the ball for good luck prior to handing it over to pitcher Hilgenberg. The girls’ quirks included on-field superstitions. “We did not want to step on the base lines. We always stepped over them when running out on the field,” Mills said.