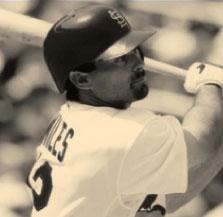 Aaron was the smallest 12-year-old on the Northern California Championship Little League Team in 1989, but grew up to be the most successful baseball player in Antioch history as second baseman for the World Champion St. Louis Cardinals in 2006, one of the five teams he played for in more than eight major league seasons. His journey began with playing for the Antioch Fireballs under the tutelage of veteran Little League coach Butch Felix. He played for the Dodgers in the Babe Ruth League, a premonition of three decades later when he would play for the “real” Dodgers in Los Angeles. He was a key factor of Antioch High’s North Coast Championship wins in 1994 and 1995. While playing varsity starter three years for the Panthers, Aaron was named to Baseball USA’s Top 100 Team and the All-State Team. He batted .538 his senior year with 34 RBIs, and spent three years as All-League. After his graduation in 1995 the Houston Astros drafted Aaron in the 19th round. Aaron spent eight years in the minor leagues working his way up, earning 2002 MVP in Double “A” League and Rookie of the Year in the 2003 Triple “A” International League. The call-up finally came in 2003 from the Chicago White Sox. The multi-tasker, who has played outfield, second, third, shortstop and pitcher, made his Major League Baseball playing debut on September 11, 2003. In 2004 the 5-foot-8 switch-hitter was voted All-Rookie All-Star Second Baseman and placed fourth in the 2004 National League Rookie of the year vote. The City of Antioch proclaimed “Aaron Miles Day” on November 20, 2004 and awarded a ceremonial key to the city now on display in the Sports Legends Hall. Aaron was traded to the Colorado Rockies that year and played for two seasons, the first player in Colorado history to hit home runs from both sides of the plate in the same game. He was traded to the St. Louis Cardinals in 2006, and made key plays for the team in its World Series win. Although primarily a second baseman, Aaron made his pitching debut against the Washington Nationals on August 1, 2007, one of the five games in which he pitched relief in the majors, resulting in an ERA of 3.60. The following year was his best year yet as a hitter in the major leagues, posting a .317 average with the Cardinals. On December 31, 2008, he signed a two-year deal with the Chicago Cubs as an infielder. He returned to St. Louis for one season in 2010 and hit .281. Aaron’s 2011 season was with the Los Angeles Dodgers, mostly playing third and second base and shortstop, appearing 454 times at bat, hitting .275 and driving in 45 runs, the second highest of his MLB career. The 34-year-old led the National League in 2011 with the highest hitting percentage with runners on base, batting .357. Aaron has already earned a spot in major league history: On April 3, 2009, he became the first batter at the new Yankee Stadium in New York in an exhibition game against the Yankees, and got a base hit. Aaron retired after the 2011 season with the Dodgers. His career stats were 932 games, 2,827 at bats, 793 career hits, 229 RBIs with a career .281 average. On defense, he carried a fielding average of .978.