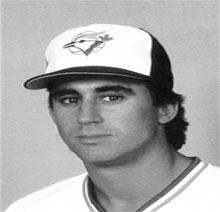 The Panther pitcher set six all-time baseball records at UCLA, but he developed his athletic gifts in Antioch Little League and later on at Antioch High, where he spent three consecutive years as a First Team All-Diablo Valley Athletic League selection and two years as All-East Bay and All-Northern California. His graduation from Antioch High in 1984 capped a phenomenal year of prep athletic achievements, rewarded with being named Athlete of the Year at AHS for his performances in two sports. He pitched for the Panthers in their North Coast 3-A victory in baseball against Hayward in the Oakland Coliseum. During that 23-5 season, Alex’s record was 10-2, with a 1.54 ERA with 89 strikeouts in 61 innings pitched. In the batter’s box, Alex hit .351 with five homers and 27 RBIs, as well as having the game-winning hit in the DVAL championship game. Alex pitched a win for Nor Cal in the North-South All Star gamed played in Riverside, then joined the best players from both squads as a combined All-Star Team from California which played the Oklahoma state high school all-stars in a three game series in Fresno. Alex capped his prep career by traveling to Japan to play in a seven game “goodwill” series, representing the USA, that was played in Japan’s major league stadiums. AHS later gave him the highest honor it could bestow by retiring his #23 baseball jersey. He is one of only four players in school history to have this recognition. The 6’ 2”, 185-pounder was First Team All-DVAL and 1984’s League Player of the Year in basketball as well as the DVAL’s top scorer, with two exceptional performances of 32 and 34 points respectively in games against Pittsburg High. Although being inducted into the Sports Legends Hall as a baseball player, Alex says the biggest moment of his prep career was “when they named me MVP of basketball and we beat Pitt three times in a row. People were coming up to me three and four years later saying how proud they were.” Alex was drafted by the Chicago Cubs straight out of high school in the 20th round in 1984 and named by USA Today Newspaper as one of the top 25 draft choices. Instead, he chose to attend UCLA on a full baseball scholarship. In Alex’s freshman year with the Bruins, he pitched the very first game of the season on varsity, leaving upperclassmen teammates in awe of his advanced skills. Alex still holds six first place UCLA pitching records (unbroken as of 2010), set between 1985-1987 that include; most wins in a season (16) and most single season starts (23). He is fourth on the UCLA list for most strikeouts in a single season (142), set in 1986. He ranks 4th on the UCLA all-time list for innings pitched in a season (139.1). His first place position in career records for UCLA that still stand: total wins (27), career games started (58), career innings pitched (341) and all-time career strikeouts (328). During his UCLA sophomore year, Alex pitched a 16-3 season, including an 8-1 Pac-10 mark, and shared the title of Co-Player of the Year in the Pac-10 League in 1986, the first sophomore to ever receive the honor. He was also named a First Team All-America selection by Baseball America. “That’s when things started to go crazy. The phone was ringing off the hook,” Alex recalls. Before he could finish at UCLA, the hard-throwing right-hander was drafted again in 1987, the #17 overall pick in the first round and the #1 pick of the Toronto Blue Jays. In 1988 he had a 12-5 season with the minor league farm team in Knoxville, pitching 149.1 innings. The right hander struck out 116 and had an ERA of 2.53. He was a Southern League All-Star game starter. The promising pitcher made his major league debut starting against the Minnesota Twins on May 23, 1989 for which he allowed one run in six innings. He was brought up from the minors ahead of other players who became better known, such as Curt Shilling and Steve Avery. Alex spent most of 1989 with the Syracuse farm team where he tied the league leader in most victories (13-7) and had an ERA of 3.13. He had 141 strikeouts during 169.2 innings pitched and was named the International League’s Pitcher of the Year. His nine-year pro career included stints with Kansas City, Seattle, San Diego and Oakland’s franchises where he accumulated 59 career minor league wins. Alex credits Butch Rounsaville, a 2007 Antioch Sports Legends inductee, with being a mentor throughout his baseball career. “The work he did with us in high school really made a difference. He was my personal pitching coach since I was 11.”