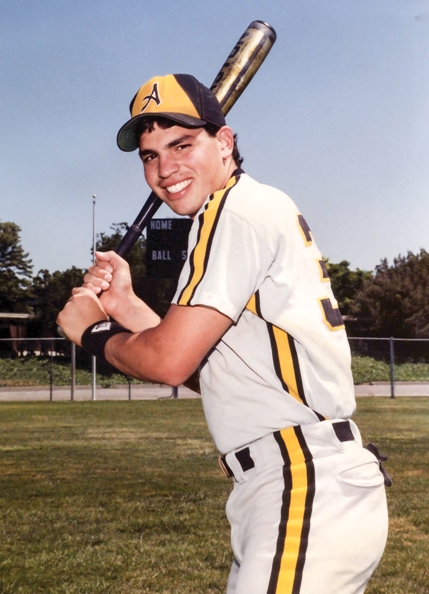 When he earned a spot on the Antioch High baseball team as a sophomore, Alfie Del Favero left no doubt that he could hit.

The sophomore outfielder batted .400 in the 1988 season and was selected First Team All-Bay Valley Athletic League (All-BVAL). It only got better from there.

Del Favero was terror at the plate his junior year. He had 11 extra-base hits, batted .513 with runners in scoring position and had an on-base percentage of .513―meaning the odds were better than 50-50 that he was going to get on base in any given at-bat. Additionally, he was one of three Panthers to receive All-East Bay honors that year, when the Panthers finished 20-6 and were No. 2 in the final East Bay rankings, despite being knocked out of the NCS playoffs in the semifinal round.

Much was expected of Del Favero as a senior. He responded with one of the best single-season hitting performances in the storied history of Antioch baseball, batting .453.

Del Favero made the transition from outfield to catcher during his two seasons at Los Me-danos College, then transferred to UC San Diego, where he was a standout.

As a junior he hit .391 with 10 doubles and 19 RBIs, and was dynamic behind the plate. He had a fielding percentage of .972 in addition to handling the Triton pitching staff adroitly. With Del Favero, UCSD was ranked 4th in NCAA Division III, and advanced to the NCAA D-III championships with a five-game series victory over Cal Lutheran. In the national tournament, Del Favero’s two-run single in the bottom of the ninth gave the Tritons a 3-2 victory over Wooster in a second-round elimination game.

As a senior in 1995, Del Favero led the Tritons with six home runs and was a Division III All-Region selection. He finished his career at UCSD with a .374 batting average, 5th-best in the school’s history. He also improved defensively as a catcher, raising his fielding percentage to .992 as a senior.

Overall, at UCSD, Del Favero hit .417 and drove in 31 runs as a junior, and later hit .453 as a senior. He earned First Team All-League honors every year—the fifth Panther to earn this impressive accomplishment.