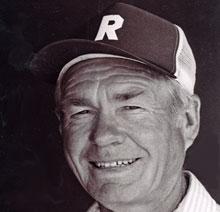 The thousands of Antioch youngsters who have been introduced to “America’s Favorite Pastime” in the last five decades owe thanks to Alvin “Kelly” Martin. Former longtime baseball coach LeRoy Murray said, “when you think of Antioch Little League, you think of Kelly Martin…he (was) the most respected man in the program.” Kelly was one of the original founders of Antioch Little League in 1955, along with his twin brother Elvin. The brothers were born in Texas, but grew up near Stockton, playing all the sports available to them at tiny Linden High School. After serving as a Marine in W.W.II, Kelly began a long career at Dow Chemical, parallel to his equally long volunteer career involved with youth baseball in Antioch. So how does someone named Alvin get the nickname “Kelly?” As he once explained it to a reporter, “It’s a long story that has something to do with being a Chicago Cubs fan and baseball…but with a name like Alvin, Kelly is a big improvement.” A little league field near the Contra Costa County Fairgrounds in Antioch was dedicated to him on April 24, 1976. Kelly’s involvement ranged from getting his hands dirty building and maintaining the city’s baseball fields, to making decisions as a member of the board of directors. In a profile on Kelly, written by Contra Costa Times Sports Editor Charlie Zeno in 1985, the longtime coach was asked what motivated him to spend so many years as a volunteer. “I love young people, and I love baseball. Put them together and that spells the reason why I decided to manage in Little League.” Hundreds of players also benefited from having Kelly as their team coach for three decades. He was an early booster of allowing females to play in the league and coached some of the first 18 girls who joined after 1975, including fellow 2010 Sports Legends Inductee Mia Rexroth. Kelly’s son Vern played on his father’s team, and as an adult, Vern coached an opposing Little League team at the same time as his dad. “My first win (as a coach) I ever got was against my father,” Vern said. “Ours was a friendly kind of rivalry. It was like Little League is supposed to be – fun. He did a whole lot of good for a whole lot of kids in Antioch. If anything needed to be done at the Little League fields, seven days a week, they would call Dad.” Kelly’s career produced five league championships, and one player – Jerry Bertolani – who eventually signed with the Chicago White Sox in the 1980s. It was Kelly’s attention to detail and the fundamentals of the game that made up the life lessons his players learned. In a newspaper interview in the 1980s, Kelly emphasized that building character was more important than winning and “hopefully it made better citizens out of them later in life.” Before his passing in 1995, Kelly was able to enjoy multiple recognitions for his service to Antioch sports. The Knights of Columbus, a later sponsor of his Little League team, honored him in 1985 with a plaque, while the East County Boys and Girls Club and the City of Antioch both recognized him with the Outstanding Youth Volunteer and Distinguished Service Award respectively, as did Congressman George Miller, who presented Kelly with a Certificate of Appreciation for Outstanding Community Service. One of his greatest honors was being recognized in 1985 by Little League Baseball’s World Headquarters in Williamsport, Penn. for his 30 years of service and bringing organized youth baseball to Antioch. Longtime AHS teacher (and former AUSD board member) Joe Olenchalk summed up the life of his friend and neighbor in a newspaper interview. “Kelly is proof that one man can make a difference.”