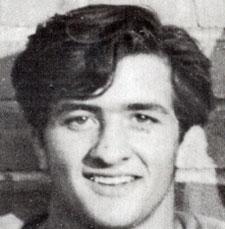 Older brother Gino – the NFL Hall of Famer – acknowledges that his bruising 215-pound little brother Angelo was the better football player in high school. “Itsie” played halfback, fullback, quarterback and place-kicker in an era when smaller teams had to cover more positions. In a 1994 interview, just after being named to the All-Time Top 20 in the NFL, Gino reflected on the Marchetti brothers’ experiences at Antioch High with teammates Worth Shaw and Nick Rodriguez: (They were) “not a little better, a hell of a lot better” than the Colts’ star. Itsie’s senior year was a spectacular one for Antioch. A screaming crowd of 6,000 jammed the stands to see the Antioch Panthers beat rival Pittsburg 13-0 in 1946’s “Big-Little” game in which Itsie scored a 21-yard rushing touchdown. Itsie was Co-MVP with his Co-Captain Bob Vossler and was named All-County in 1946. For the Panthers’ 19th consecutive victory, the multifaceted Itsie ran for 108 yards in nine carries and had a touchdown against Acalanes. Itsie was honorable mention on the All Nor-Cal team. Ironically, it was Itsie who originally drew the attention of college football recruiters. According to a news article based on an interview with Nick Rodriguez in the early 1990s, “Stan Pavco, the line coach at Modesto Junior College, came down to recruit Itsie and Nick Rodriguez…While he was luring the two, Gino rode up on a motorcycle. ‘That looks like a good player,’ said Pavco, pointing to Gino, ‘why don’t you bring him down with you?’” Itsie wound up playing on the St. Mary’s College freshman football team, serving as captain. Described in 1952 as a “pile-driving fullback,” Itsie later played for the very popular Antioch Hornets semi-pro team that filled the AHS stadium with tickets selling for $1. The games were a major event in the town, which then had a population of only 11,000. A 1952 banquet that drew more than 100 celebrants honored the triumphant Hornet team and particularly Itsie, who was named outstanding backfield offensive player. Details are sketchy, but in a carefully preserved 1955 Topps Football Card in the Sports Legends collection, both Gino and brother Itsie were photographed in the team picture of the Baltimore Colts. Itsie was later released, but big brother Gino went on to make history.