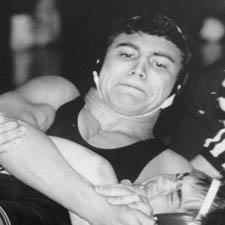 Anthony “Macho” Camacho lived up to every bit of his high school nickname. The High School All-American grappler completely dominated his sport in East Contra Costa County during the 1980s. Competition began when he was a young kid, grappling for the Golden State Wrestling Club, an organization his father, Richard, helped found. Anthony was an 8-time AAU California State Champion, 2-time Western Regional Champion and 4-time Grand National Champion, all before entering high school. Once he hit the mats for the “Black and Gold,” Anthony continued to improve. He intimidated his opponents with an overall prep record of 125-5. Wrestling at 126 pounds in his first high school season, he placed first in the DVAL and first at the North Coast Section Championships, easily qualifying for the California State Championship. Due to injury, he was unable to attend State, but came back strong as a junior in 1987, becoming team co-captain and defending his league and North Coast titles prior to taking third place at State in the 132-pound class. Anthony reached his zenith as a senior, taking the league and North Coast titles for a third straight year but had a heartbreaking elimination at State in the second round, his first loss of the year after 39 straight wins. Antioch’s team went on to win the State wrestling title for the first time in school history. Redemption came at the USA Wrestling Southwestern Regionals, when Anthony bounded back to win in his 138-pound class. He later took 5th at the national level. After being named the #2 top prep prospect of 1988 by USA Wrestling Magazine, the University of Minnesota offered Anthony a full-ride athletic scholarship, which he accepted, and began his college wrestling career, but only stayed one season. He accepted a second scholarship to complete his education back home in California and went to California State University, Fresno. He wrestled in the 150- and 158-pound classes in college, where he was twice a runner-up champion in the Western Athletic Conference. The two-year team co-captain was a 1991 NCAA National Championship qualifier and ranked third in the Pac-10 for his weight class. In 1992, he placed second in the University Freestyle All-American USA Wrestling tournament and fifth in the Sunkist International Freestyle Open Tournament. Anthony stayed involved in wrestling after college, becoming an assistant varsity wrestling coach for Deer Valley High, and Clovis High. He was head coach at Clovis East High and Fresno City College, the latter experience earning the title of California Community College Coach of the Year in 2002. Since leaving coaching in 2002, Anthony completed a master’s degree and now works as a private investment management advisor. He lives in Fresno, where and he and his wife of 20 years, Deanna, watch their four children participate in school sports.