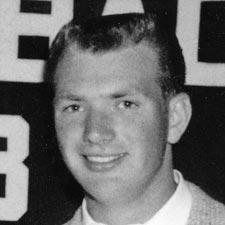 Blasting hits, striking out batters and “flawless fielding” made Art Regoli a key player in every inning for the Panthers when he played baseball during a three-year varsity prep career between 1956-1958 under Coach Jerry De Rushia and Babe Atkinson. A .361 batting average as a senior earned enough attention to be selected for First Team All-Diablo Valley Athletic League, Second Team All-Metropolitan and Third Team All-North State, the latter two chosen by the San Francisco Examiner. Local sports writers’ stories focused on several performances by the Panther team captain; a two-run homer that contributed to a 15-6 wallop of rival Pittsburg High, three runs, a 340-foot homer and five RBIs in a second matchup over Pitt of 8-6, and two homers in a 15-3 wallop against Pacifica High in West Pittsburg (now Bay Point) with “both 400-foot homerun clouts …to deep center field.” Three homers and nine RBIs occurred over a two-day period, leading one sportswriter to compare Art to the legendary Babe Ruth, calling him “Antioch’s Bambino.” The baseball team captain was also a leader off the field, serving as Senior Class President and “Block A” Vice-President. The Antioch Quarterback Club honored him as “Most Outstanding Baseball Player” at AHS in 1958. Although he played third base, Art spent some time on the mound, and was tapped to be the starting pitcher against Miramonte, recording seven strikeouts over four innings in a 16-1 wipeout. As a junior, Art was named First Team All-DVAL for third base, and had a .270 batting average: He had four home runs during the season, including a grand slam. It wasn’t just Antioch High that benefitted from the “phenom slugger’s” skills. Art played for several community leagues; The East Oakland Merchants of the Connie Mack League in Oakland, The Latin American Club semi-pro team in the Bay Counties League and for Pittsburg’s David A. Solari Post #151 in the Junior American Legion League. Pittsburgh Pirates’ scout Bob Zuk of Hayward, who had come to check out the opposing team’s pitcher, instead, was more impressed by the Panther “third sacker.” Art’s playing career ended after high school, but he continued serving the Antioch community as a Little League and Babe Ruth League coach in the 1960s and ‘70s.