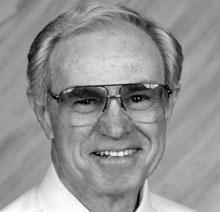 If anyone asks Bill Snelson about his own experiences as an athlete, the likely response would be, “Oh…I boxed a little.” What the modest former Panther coach doesn’t reveal is that he was second in NCAA Championship boxing while attending California State University, Sacramento, and was inducted into the CSUS Hall of Fame in 2002. Although he did not continue in boxing, he did instruct hundreds of Antioch athletes as a four-sport coach for the Panthers; football, basketball, baseball and diving. His teams won multiple championships and dozens of his players earned positions on All-League teams. Bill graduated from Corning High School in 1948 and spent four years in the Air Force before finishing his college education at Shasta College and CSUS. Bill played tight end and defensive end on the football teams. He also played halfback and quarterback on the Alaskan Armed Forces Championship Team in 1953. His first job after graduation was as a physical education teacher and football coach at Antioch Junior High School in 1958. He led the Wildcat freshman football and track and field teams to two undefeated seasons in 1958 through 1960. He transferred in 1960 to Antioch High School where he was an assistant coach. He was head junior varsity football coach between 1961-1964, earning two league championships in 1961 and 1962, a second place in 1963 and a third place in the league in 1964. Named as Head Varsity Football Coach in 1965, Bill led the team to a Diablo Valley Athletic League championship the following year . By the end of the decade, Bill’s mentoring had produced 25 players named as All-DVAL; 15 on First Team and 10 on Second Team. Coaching the 1966 DVAL champs led to Bill being named co-head coach in the Contra Costa – Alameda All Star Football Game in 1967 which featured three of Bill’s Panther players; Larry Merlini, Steve Sanchez and Louis Strusis. Ironically, the opposing Alameda County coach was none other than former AHS gridiron star Grover Garvin, a Sport Legends inductee in 2009. Bill says that a highlight of the 1960s was coaching the thrilling win over Pittsburg in the Big-Little Game in 1969 – the first win for Antioch since 1947. As Varsity Head Baseball Coach, Bill also saw success on the diamond; between 1966-1975 he coached three league championships: 1969, 1970 and 1974, two second-place finishes and five third place finishes. Three of his players were league batting champions; Dan Bell (1968), Bob Vera (1969) and Mike Lucido (1971). He coached diving for one year in 1965 in which his top diver Gary Martinez went on to place third overall in the DVAL and 8th in the North Coast Sectional Championship. For two seasons, Bill was assistant football coach for Diablo Valley College, working with quarterbacks and receivers; Steve Leroy, Gary Sheide, Jim Magana and Jared Butler were among his charges. Bill’s expertise wasn’t reserved for AHS students. He coached two teams in the Joe DiMaggio Baseball League, an off-season high school summer league he helped found. His teams had a .750 record during two years he coached in 1968-1969. He continued on as their manager until 1975. He was head coach for an Antioch Babe Ruth League team in 1978 and 1979. What’s most memorable for Bill during his decades as an Antioch coach was the “extreme dedication” which Panther athletes had. It is what kept him from continuing on to other coaching jobs. “I started at junior high, then high school, then DVC and I had visions of being the head coach of the ‘49ers -I really did – but the kids are the ones who just kept me here.”