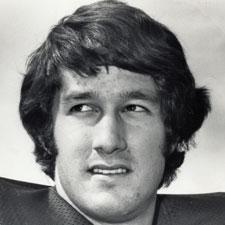 These days it’s rare to play varsity in four sports, but Bob distinguished himself by earning his gold block “A” four times during every year he played for Antioch High between 1966-1969. Bob anchored the 440-relay team in track which finished fifth in North Coast Section II competition his senior year with a time of 43.2; started in basketball and baseball and earned All-DVAL defensive back during his busy senior year. Those accomplishments earned him the title of Panther Athlete of the Year in 1969, as well as Antioch High’s Ron Pritchard MVP award for outstanding back. Fitzpatrick Chevrolet named him Contra Costa County Super Sport of the Week for his October, 1968 performance against Pacifica High in which he rushed for 130 yards in 15 carries, leading the Panthers to a 40-0 win. While Woodstock was in full swing in New York, the 6-foot,175-pound runner was practicing to play in the Contra Costa-Alameda All-Star Game in August of 1969. He intercepted a pass and ran for 32 yards in that 14-0 win, but it was his bone-jarring work as a defensive back that merited praise from the Contra Costa All-Star team defensive coordinator Tom Kinnard, who described Bob glowingly. “If there is a better hitter around, I haven’t seen him. Nobody hits harder than White.” Bob’s football skills earned him a full scholarship to the University of Arizona, where he played all four years; cornerback in 1969 on the frosh team, second team safety and special teams varsity in 1970, starting defensive strong safety and first team special teams in 1971 and capping his college career in 1972 as a starting free safety. Not only was he All-Western Athletic Conference in 1971 and ‘72, but All-WAC for academic excellence. Bob had 11 career interceptions for the Wildcats and in November, 1972 and set a U of A record for the all-time longest interception return for a touchdown: 78 yards against Brigham Young University. The Western Athletic Conference selected him as Player of the Week for that accomplishment. After earning a degree in public administration, Bob was drafted in the 11th round by the Pittsburgh Steelers, but instead chose to leave football and pursue a career in parks and recreation.