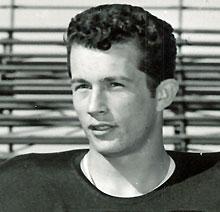 Suiting up for the Rose Bowl in 1957 was the culmination of a stellar prep and college football career for this Panther football star. Carl’s Antioch High accomplishments included scoring 13 touchdowns his senior year, part of the 24 he scored as a three-year varsity player during the 1952-1954 seasons. As a senior, Carl was AHS’s MVP and named to the First Team All-Contra Costa squad and Honorable Mention on the All-Metropolitan Team in football. He was also nominated to play in the North-South Shrine Game. His most prestigious recognition was being named to the National High School All-America Team of 1954. In one phenomenal game against Acalanes in his junior year, Carl rushed for 304 yards on 18 carries (averaging 16.89 per carry) in a 33-0 victory which included three spectacular touchdown runs of 46, 63 and 88 yards and a 21-yard touchdown called back. The awestruck crowd gave Carl “a standing ovation from both sides of the field for a magnificent game as he came to the bench,” according to a local newspaper account. Acalanes Coach Ervin Mattson called Carl “the finest back in the league.” During that season, Carl scored nine touchdowns for the Panthers and was selected as the only junior on the First Team All-County football squad. Carl was interviewed by the AHS Prowler student newspaper in 1953 about the football team’s season and said that “his biggest thrill was making a touchdown against Liberty the first time he carried the ball on the varsity team,” a spectacular 65-yard run. Carl also showed his athletic skill in basketball and track. He was “Athlete of the Year” in track as a sophomore. His performance in the 440-yard dash in 1953, an event he had never run in competition before, earned the Contra Costa championship. The big colleges took notice; full football scholarship offers were made by Stanford, UC Berkeley, UCLA and BYU, but the 5’11”, 189-pounder eventually signed with Oregon State University where he played for two years. During those years the OSU Beavers won the Pacific Coast Conference Championship and went to the 1957 Rose Bowl in Pasadena, losing to the Iowa Hawkeyes 35-19. Carl’s ability was recognized later on by the Antioch Ledger, which polled local football coaches and experts to determine the “Cream of the Crop” among Antioch High football stars who played between 1950-1967. Carl was named to the team as the overall second-highest vote-getter among all the nominees.