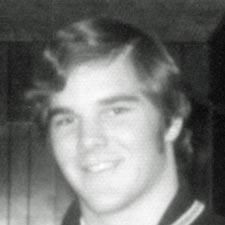 The “Carl Pantle Award” for the most courageous football player has been bestowed by Antioch High School since 1978, an appropriate honor for the amazingly talented young man whose life was cut short just as he reached adulthood. The robust 6-2, 210-pound fullback was a selection for the Contra Costa-Alameda All-Star game, named First Team All-Diablo Valley Athletic League, (linebacker and fullback) and First Team All-East Bay (Defense) and Second Team All-East Bay (Offense). Antioch High’s “Hitter of the Year” scored two rushing touchdowns in a 20-0 shutout over rival Pittsburg High in 1974. He was fifth best overall in the league in yards per carry, averaging 5.1. During his senior year Carl ran for 496 yards and had 97 carries, with six touchdowns. As a junior in 1973, Carl earned Second Team All-DVAL honors as a defensive player, the second year out of three as a varsity starter for the Panthers’ three consecutive DVAL championship teams. “Pantle is a premier football player,” said his coach, Marv Comstock, in a local news interview, “He is an outstanding linebacker as well as a great fullback.” Carl, who could bench-press 395 pounds, was a top discus thrower, placing second in the league as a senior and making Second Team All-DVAL in track and field. He still holds the eighth all-time best discuss throw at AHS: 162-feet, 6-1/2 inches. Carl appeared to have a bright future in football and was offered a full-ride scholarship to the University of Arizona, but left the campus before beginning the football season. He returned home to play locally for Los Medanos College in Pittsburg. With the Mustangs, Carl proved himself once again, racking up several recognitions during his single season in community college: Outstanding Defensive Player and Player of the Week at LMC, First Team All-Camino Norte Conference, First Team All-Northern California and a nomination for all-state. He earned yet another full football scholarship to San Jose State University, but was never able to attend. Tragically, Carl was diagnosed at age 21 with Ewing’s sarcoma, a rare bone cancer, and died in 1978, six months following his diagnosis. In written tributes following his passing, then AHS principal Don Richardson best expressed how Carl was perceived. “He was my image of what all parents would like their child to be like…other kids really looked up to him.”