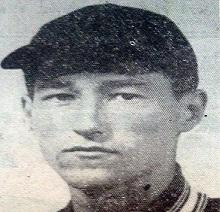 The “ace southpaw” brought Antioch High roaring back into competition as a baseball powerhouse after a WWII hiatus, leading the Panthers in back- to- back league championships. The 6-foot-2 senior pitched a no-hitter, a one-hitter and a two-hitter during the 1950 season. Chuck’s no-hit performance against Alhambra High was described by a local sportswriter as “masterful” in its near-perfect elimination of 23 batters. Chuck was the only Antioch player chosen for the annual Prep Baseball Classic All-Star Game, sponsored by the American Legion. He pitched two innings in the game, which pitted public school standouts from throughout Contra Costa against the top talent from San Francisco’s Catholic schools. The Contra Costa team won the game with a 7-3 upset victory, held at the AAA Pacific Coast League’s Oakland Oaks’ baseball park. As a junior, the power hurler had a 6 win-1 loss league record. Chuck threw a four-hit, no-run 1-0 victory, clinching the Contra Costa Athletic League title in 1949. The Panthers’ top pitcher allowed 37 hits and 13 runs and had six victories in almost 53 innings pitched. The fine defensive play of teammates, Bob Ehrlich, Jim Coalter and Jack Garrow was also credited with contributing to the Panthers’ overall season record of 11-3. In addition to being an outstanding baseball player, Chuck earned kudos in track and field, tying for first place at the 1948 North Coast Section track championships with a 5’8” leap in the high jump as a sophomore. To gain experience before beginning a pro baseball career, Chuck spent his first post-graduation summer pitching in the semi-pros, and continued to be mentored by Coach Babe Atkinson. Chuck went to Stockton to pitch in batting practice for the Stockton Ports of the California League, and for the Oakland Oaks. Chuck received a second letter of interest from the St. Louis Browns in the summer of 1950. The first was sent while he was an AHS student, requesting that the American League team would get “first call,” when the lefty decided to turn pro, a common practice to obtain players prior to when major league baseball began conducting an official draft in 1965. The Boston Red Sox also sought Chuck’s services, but after a full night of contract negotiations lasting until 3 a.m., with Coach Babe Atkinson at his side, Cleveland Indians scout Mike Catron convinced the 18-year old to sign a contract. By spring 1951 the long, lean southpaw was sent to Bakersfield for spring training. The America League team optioned Chuck’s contract to the Pittsburg Diamonds of the Far West “D” League, coached by Vince DiMaggio. The Diamonds whipped the Redding Browns twice in a double-header on June 12, 1951, before the team shockingly disbanded at midnight due to financial woes after a 46-game season, going out on top of their division with a record of 28-18.