Skip to content
Individual Athlete – Track and Field
Class of 2011 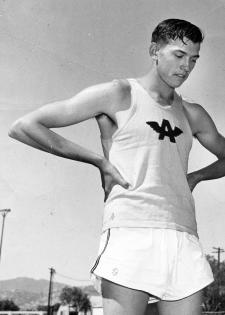 As the first athlete from Antioch High to ever stand on the track and field state championship medal podium, Curtis was rewarded for setting the standard in speed. His school record in the 880-yard run lasted for 12 years and in 1949 was the eighth fastest time recorded that year in the United States according to Track and Field News. An Antioch Ledger sports article called him “the greatest runner ever produced in Antioch.” During the Post WWII years, Curtis set a series of running records that gained regional, state and national recognition. During his senior year, he established a new meet record of 1:59.0 in the 880-yard run at the Contra Costa Athletic League meet, (precursor to the DVAL), breaking the previous record set in 1934, and earning First Team All-League. Curtis would make two trips to the California state meet, as a junior in 1948 and as senior in ’49. At the Cal Aggie Invitational at U.C. Davis – featuring athletes from 57 high schools in Northern California – Curtis broke a 16-year-old meet record in the 880 with a time of 2:01.4. He was champion at the North Coast Section meet as well and earned Antioch’s first ever medal at the California Interscholastic Federation championships. Running on a badly blistered foot, Curtis placed third at state with his personal best of 1:58.8, cheered on by coach Jack Danilovich at the Los Angeles Coliseum: In the same state meet Pittsburg High phenomenon and future NFL Hall of Famer John Henry Johnson set a national high school record in the discus. Curtis continued his running career at Modesto Junior College in 1949-1950. The Modesto Bee featured him in one of its weekly sports “caricatures” by Murray Olderman. The cartoonist exaggerated the “lanky” limbs of the 6-foot-3 runner as being able to “cover gobs of ground,” as he sprinted past his diminutive competitors who were captioned as saying “no fair using stilts!” While at Modesto, Curtis switched to the longer one-mile distance, running a 4:26.7, which contributed to the Pirates winning the Northern California junior college track title. When he wasn’t on the track, Curtis played left field for the AHS Panthers’ baseball team in 1949. His .379 batting average helped Antioch on the journey to a league title.