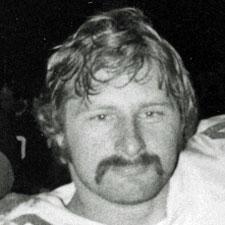 This Panther gridiron star was “the best halfback I have had the pleasure to coach. He can do it all,” according to the late Marv Comstock. Ironically, Dan did not play football as a freshman because he “didn’t think he was good enough” according to a feature story in the Antioch Ledger. This 5’9” explosive runner was the Diablo Valley Athletic League #1 rushing leader for the 1974-75 season and nearly topped the list in scoring. It was his 1,012 yards in 166 carries – with 13 touchdowns – that powered the Panthers to their third consecutive league title and earned Dan Antioch High’s “Ron Pritchard” Award. Dan played varsity for two years, earning “Back of the Year” at the Contra Costa Times-Fitzpatrick Chevrolet Super Sport Awards Banquet and named as one of only six from the Bay Area in 1974 to be nominated as an All-America Football selection, one of the top 100 prep players in the nation. Dan made Second-Team All-DVAL as a junior and First-Team as a senior. His 2-year varsity totals: 1,651 rushing yards, 22 touchdowns and 148 points scored. His 146-yard rushing performance in the Antioch vs. Pittsburg 20-0 victory in 1974 – before 8,000 fans – earned him game MVP as well as the admiration of the Pirates, who bestowed their “Most Worthy Opponent” Award to Dan. Dan played varsity basketball and baseball and was a co-winner of the AHS Athlete of the Year honors in 1975. Following graduation, he was a running back for the Los Medanos College Mustangs. Dan was selected All-League Second Team for the 1975-1976 season. The University of Nevada, Las Vegas, offered him a full scholarship, but Dan left UNLV before his first season started. A transfer to California State University, Chico quickly followed, where Dan “redshirted” there the first year, and then played football for the Wildcats for two years, earning All-League. Following graduation, Dan later became Antioch’s first foot patrol police officer and was named Officer of the Year in 1989.