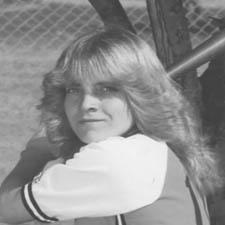 A professional ball team would pay millions to have a pitcher with the stats of Dawn Hilgenberg. The Antioch High School phenomenon finished the 1984 season with a 24-1 record (the team was 29-1) and an ERA of .94 with 126 innings pitched. Her batting average was just as impressive: .370. No-hitters? She’s had those, too. Two in fact while at Antioch High and two more in college. Dawn pitched the first softball no-hitter in the history of California State University, Hayward (now East Bay) and performed the same feat at San Jose State University, pitching its first softball no-hitter on record in 1986. Dawn’s talents propelled the Antioch High School girls to their first ever North Coast Section title in 1984 and was named North Coast MVP, the first Antioch- and DVAL – athlete to receive the honor. She was DVAL Player of the Year and the first Panther to be named East Bay Player of the Year by the East Bay Prep Writers Association. Coach Andria Edwards, also being inducted in 2013 into the Antioch Sports Legends Hall of Fame, told a sports reporter in 1984 that Dawn has “a nice change-up and a nice rise and drop on her pitches that really fools batters.” The article referred to Dawn as a “fast worker” because she averaged only one walk a game. Dawn was also a player on the volleyball team in 1983 that competed at North Coast, perhaps one of the only Antioch athletes to play on more than two NCS qualifying teams in the same school year. 1983 was not Dawn’s first appearance in an NCS tourney. She played for the AHS softball team that made it to the NCS Championships during her junior year in 1982. As a junior, Dawn pitched like a machine for the Lady Panther softball program, hurling 23 innings in one day during the St. Vincent Tournament in 1983, in which she also tossed for 17 straight innings during a grueling final championship game against Granada High in Livermore. After her illustrious high school career, Dawn first went to California State University, Hayward (now Cal State East Bay), where she was named Second Team All-League in her freshman season for the Pioneers. Hayward had a 19-1 season in 1985 and was ranked in the national Top Ten. She transferred to a Division I school, San Jose State University, and later accepted a scholarship there, completing her college career with 12 single season and career records that remains in the all-time SJSU Top-Ten. Dawn continued to play softball after college in the Pacific Coast League of the Amateur Softball Association Fast-Pitch Class A, where she was chosen as pitcher for the All-Region Team; She also participated in the Women’s “A” Fast pitch National Championship Tournament in 1987. Dawn now works as a first grade teacher in the Oakley Union School District.