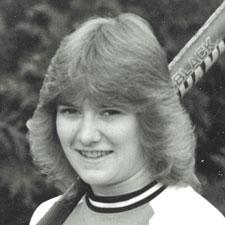 No player will ever again wear the number 12 on their Panther softball uniform. It was officially retired from use in 2007 – forever linked with Debbie Nelson, a 1983 star athlete at AHS. “There’s a lot of blood, sweat and tears in (that) uniform,” she said and perhaps a few scrapes from the 43 bases she stole her senior year. Debbie is a true all-around athlete; she was on the volleyball, softball and basketball teams during all three years at Antioch Senior High School, a feat few other young women achieve. Basketball was Debbie’s favorite sport, but her 5-foot, 2-inch stature put her at a disadvantage. However, It didn’t hold her back in softball, a sport that led to a college scholarship, coaching opportunities and a thriving business. Although barely over 100 pounds, Debbie said she had to “pound for pound, physically and mentally outwork other people” to compete successfully. By the time she was a high school junior, Debbie earned All-League honors in all of her sports. She was All-League in three sports again for her senior year in 1982-83, and racked up several prestigious honors; co-MVP of the softball team, AHS Female Athlete of the Year, All East-Bay Softball Athlete of the Year and Big “C” Athletic Club Softball Athlete of the Year. Debbie played softball at Sacramento City College for two years and transferred to California State University, Sacramento on a softball scholarship, earning a B.S. in recreation administration, and All-Region, All-State and NCAA All-America as a second baseman. Following graduation, Debbie’s first coaching job was at St. Francis High in Sacramento. During her one year as an assistant coach, the team won the California Interscholastic Federation Championship. Debbie returned to CSUS to pursue an MBA, while she moved up through the coaching ranks with the Hornets, finally becoming head coach for her final year there. Debbie then moved on to San Jose State, where she served as head softball coach for four years. In 2001, she coached an Under-18 girls traveling softball squad, sponsored by the People to People exchange program, to a silver medal against European opponents. In 2004, Debbie was hired by the National Pro Fastpitch (NPF) League as Assistant Coach to the California Sunbirds during their only season in Stockton. Simultaneous with her coaching career, Debbie started her All-American Sports Academy business in Tracy in 1997, which trains between 200-300 amateur softball and baseball players each week. She also spent summers as a traveling director of U.S. Sports Nike Softball camps throughout the western states.