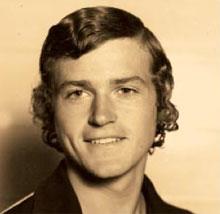 Every stroke. Every distance. Every record. Dennis Boyd defined swimming at Antioch High between 1970-1972; outstanding swimmer of 1971 and 1972, outstanding water polo player of 1971 and captain of both sports’ teams. During his junior year, Dennis set seven school records, including a 55.7-second winning time at the North Coast 100-yard backstroke match, a full two seconds faster than anyone else. Dennis was part of an Antioch swimming dynasty, along with brothers Tim and Tom, who competed since early childhood. By 14, he was ranked first in the U.S. in his age group in the 50-meter freestyle and 100-meter backstroke. At 16, he was ranked 17th in the world in the 100-meter backstroke, the top swimmer in his class nationwide. Competing as a Panther, Dennis’ backstroke performances won the DVAL and North Coast titles, as well as being named honorable mention All-America. Dennis’ ability wasn’t confined to the pool, as he was awarded a bravery medal in junior high for saving a classmate form drowning in the ocean. Dennis earned a full-ride scholarship to the University of Missouri, where he swam all four years, setting school records in the 100- and 200-yard backstroke and 200-yard individual medley. As swim team captain in 1976, Dennis was recognized as one of the university’s top student leaders. Graduating first in his business logistics major put Dennis on track toward his current success as a Missouri entrepreneur: five-time Inc. magazine honoree and Small Business Administration Hall of Famer. Dennis still swims competitively, currently holding the St. Louis Senior Olympic records in the 50-yard backstroke and 100-meter individual medley in the 50-54 age group.