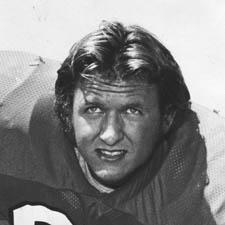 Varsity coach Sal Siino called Dennis Opsal “the finest high school football prospect I’ve seen in the Foothill and Diablo Valley Athletic Leagues.” “Big Opie” was a defensive tackle starter for the Antioch High Panthers as a junior in 1974, but it was as a senior that his prep football career took off. The 6-2, 230-pounder was the MVP for Antioch and received the coveted Gino Marchetti “Most Valuable Lineman” award, named after the NFL Hall-of‐Famer and former AHS player. He was First Team All-Diablo Valley Athletic League on both offense and defense. Dennis was chosen as the DVAL “Lineman of the Year,” an honor sponsored by Fitzpatrick Chevrolet, and during the season received the Fitzpatrick “Super Sport Athlete of the Week” for his play against archrival Pittsburg High. Dennis’ near perfect performances on the gridiron earned a position on the First Team All-East Bay on offense and an Honorable Mention for All-East Bay on defense. He was the only East Bay player named to the Citizens Athletic Foundation First Team All-Northern California squad. Dennis was no slacker in the off-season. He was chosen Second Team All-DVAL in track and field for his shot put performances. As a 3.25 GPA student, Dennis was heavily recruited after graduation from Antioch High, and accepted a full-ride scholarship to the University of Nevada, Las Vegas. While there, he was “a model of consistency,” according to his coaches. Dennis was a three-year starter for the Rebels as an offensive guard and was the Offensive “Player of the Week” twice, against Wyoming in 1978 and Utah in 1979. The culmination of his football career was receiving the UNLV award as “Most Inspirational Player” in 1978. Dennis’ Offensive Line Coach John Lowry had high praise: “You won’t be bored by watching this young man in number 68, he rarely makes a mistake.” Following his career at UNLV, Dennis was an assistant coach for the Los Medanos College Mustangs and spent two years coaching the Semi-Pro Antioch Hornets. He has spent the past 25 years as a Circulation Director for USA Today Newspaper.