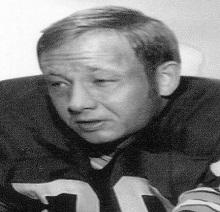 Few football players distinguish themselves enough to be put on a “Dream Team,” but Doug was the only Antioch player in 1963-64 to earn a spot on the coach-selected Contra Costa County All-Star squad and was chosen by the Daily Ledger for its All-Decade Team, composed of the best players to come out of AHS between 1960-1970. The senior was an All-Diablo Valley Athletic League tackle and received the MVP award for AHS as well as Antioch High’s Gino Marchetti Award for outstanding lineman, named after the NFL Hall of Famer and AHS alumni. The offensive and defensive tackle played every football game as a starter during his senior year. Doug earned a full-ride football scholarship to Utah State University, and led the Aggies as captain during his senior year in 1968. He was one of the two top tackles on the Aggie freshman team, but needed surgery for a severe knee injury as a sophomore and was out the entire season. His scholarship was cut in half and Doug had to prove his worth, which he did. In the first week of drills as a junior, he was back in top shape and led the Aggies to an eventual 7-2-1 record. The Antioch mailbox of Doug’s parents was frequently the depository of letters of interest from the NFL; the San Diego Chargers, Dallas Cowboys, St. Louis Cardinals and Green Bay Packers all wanted to draft him. The Packers triumphed, and selected Doug in the eighth round of the 1969 draft, signing the 6-foot-5 250-pounder to a guard position, the 194th overall pick in the NFL. The official 1969 Green Bay Press Book lists Doug’s 5.0 seconds in the 40-yard dash and describes his qualities as “good speed and quickness, keeps his feet well, quick reactions and agility.” The Packers decided to keep their existing players after winning two Super Bowls, and released Doug after a month into the pre-season. He was picked up by the semi-pro Spokane Shockers and played for the Continental League team for one season. The following year, the NFL gave Doug another shot, and he was picked up as a free agent by the Kansas City Chiefs (coached by Hall of Famer Hank Stram) but was cut in the pre-season. Football never left Doug’s blood. He completed a master’s degree after his football career ended and embarked upon a 29-year teaching career. He retired in 2002 but continues as an assistant football coach at Minico High in Idaho, where he was honored as State Assistant Coach of the Year in 2004.