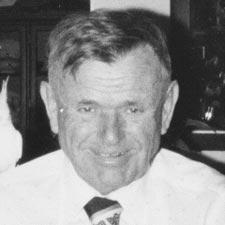 The opportunity to play organized baseball in Antioch was limited until Edward “Mr. Baseball” Burke became involved. Burke was an initiator of the first Babe Ruth League in 1956, which gave many 13- to 15-year old boys their first experience with playing hardball. Burke managed the team sponsored by Reghitto Motors that same year and served as the league’s president for 11 years. The San Francisco native grew up in the Bay Area, graduating with a master’s degree in accounting from U.C. Berkeley in 1933. Burke worked as head accountant for the Western California Canners, and later Tillie Lewis Cannery, where he spent a combined 35 years. Burke settled with his bride Claire in Antioch in 1942, where they had a home built on C Street and raised four sons and an adopted niece. Since the baseball league owned the boys’ uniforms, it was Mrs. Burke who often took on the task of washing them each season. Once the Babe Ruth League was going strong, Burke turned his attention to the older boys, and in 1960 formed a traveling team sponsored by the Antioch American Legion Harding-Noia Post #161. In 1962 he took on the duty of organizing the teams in the American Legion-sponsored league, geared to boys age 16-18. Antioch eventually grew to have four American Legion teams that played games on Memorial Field near Putnam Street. The Antioch Chamber of Commerce honored Burke, along with Rupe Johnson, with its prestigious Citizens of the Year Award in 1956 for their efforts at bringing youth baseball to Antioch. Burke was a major contributor to civic organizations within his adopted town; he was a Boy Scout leader, the first president of the Holy Rosary School Parents Guild in 1955, Past President of the Young Men’s Institute’s Lawrence Council #26 and Commander of the American Legion’s Post #161 in Antioch. Today’s youth are reminded of Burke’s long-ago efforts when they play on the ball field named in his honor at the Babe Ruth Complex located north of 10th Street in Antioch, adjacent to the Antioch Historical Society Museum.