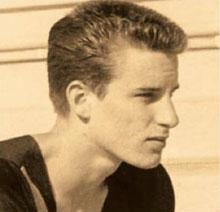 In the decades before high-tech running shoes and synthetic tracks, Eddie Savage sprinted into the Antioch High, Contra Costa County and North Coast record books in the 660-yard dash. His record-breaking prep career began in 1960, by setting the best time in Contra Costa County: 1:30.4 in the 660. By the spring, he clocked 51.2 seconds in the 440-yard dash, breaking a record set by Antioch’s Mack Enz in 1959. In the Martinez Relays of May, 1961, Eddie aided his Panther team – Richard Neveu, Allan Ramsey and Dave Farley – in winning the 2-mile relay race with an 8:06.7 time. That same season, he set the 660-yard course record of 1:24.2 in the County League meet. At the season end, Eddie continued to improve, peaking at the North Coast championship. His tike of 1:22.9 in 1961 broke a North Coast record. The speedy Panther led his cross country team to a DVAL championship that year and was named MVP. Eddie continued his running career at Fresno State in 1962. He attended on a full athletic scholarship and lettered all four years as well as serving as president of the Bulldogs’ “Block F” Society. As a freshman, he set a cross-country record in the 5000 meters and ran the seventh fastest 880-yard race in the college’s history – 1:53.2. Following graduation, Eddie became a biology teacher for 12 years and coached track at three California schools; Selma High, Sanger High and Parlier High. He coached two individual athletes to state titles; Terry Barr in the triple jump and Cole Herron in the high jump.