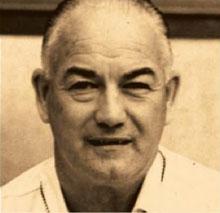 Coach Atkinson called the shots in a five-decade coaching career that spanned from 1935-1987. He began humbly: as a San Jose State student, he hitchhiked into San Francisco for the $1 a game pay to referee basketball. He played six sports as a teen and lettered in four at San Francisco’s Commerce High. Babe coached 10 years at Madera High prior to arriving at Antioch in 1947. Under Babe’s 25-year tutelage, the Panthers won league championships in the several sports he coached; 1949, ’50 and ’52 in varsity baseball, 1954 and 1956 in “B” basketball; four consecutive first place finishes for JV baseball between 1968 – ’71. He umpired California League baseball games and was co-founder in 1952 of the Contra Costa Football Officials Association. Between ’47 and ’66 Babe was refereeing Antioch Industrial League basketball games, Antioch Alumni football games, Summer League softball games and the Modesto Elks Charity Baseball games played by major and minor leaguers. Babe often umpired several games per day. That would explain his lifetime totals of 655 football games, 1,045 baseball games and 690 basketball games – 2,390 contests in all. Babe was instrumental in development of Antioch’s youth baseball programs in the early 1950s along with Mno Grant. Babe directed baseball clinics for all ages and several leagues, including “Grasshoppers” at City Park. He could also spot potential talent; between 1952-72 he as a “bird dog” scout for the Boston Red Sox and Baltimore Orioles, guiding Don Landrum and Kiko Garcia into professional baseball contracts. Babe was honored in 1983 by having AHS’s baseball press box dedicated to him; in 1995 with an award named after him created by the North Bay Officials’ Association, and on his 90th birthday received a California State Assembly resolution.