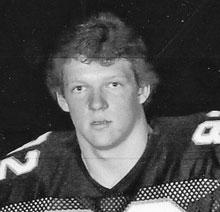 The 1984 Antioch High graduate earned a long list of honors and achievements during his three years as a varsity tight end and linebacker. The 6’ 4”, 245-pound tight end helped the Panthers win the DVAL Co-Championship in 1983. He was later chosen for the Parade Magazine All-America High School Football Team and for the National High School All-America team by the National High School Athletic Coaches Association. He was also named a Blue Chip All-American Top 20 player. Eric’s accomplishments on the field were equaled by his abilities in the classroom, as evidenced by being nominated to be on the American Academy of Achievement’s High School Academic All-America Team. His alma-mater’s accolade was being named Athlete-Scholar of the Year at AHS in 1984, (as well as being overall Outstanding Student Athlete). Antioch High coaches awarded Eric the inaugural “Sal Siino Team Award.” The Contra Costa Times chose him as the top pick of its “Cream of the Crop” team of players recruited by colleges. He is the all-time statistical leader at AHS as a tight end with 50 career receptions for 711 yards. Stanford University awarded Eric a full football scholarship, where he was a co-starter his freshman season, and a full starter as tight end for his remaining three years, graduating in 1988. As a Stanford senior, Eric made the Athletic Director’s Honor Roll and was honorable mention on the All-Pac 10 team. Eric’s play earned a starter position in the Gator Bowl against Clemson in 1986 and in 1988 for the East-West Shrine Game. The Stanford tight end played in the 1988 Hula Bowl All-Star game in Hawaii. Eric stayed in California to begin his National Football League professional career with the L.A. Raiders, where he played middle linebacker and was a standout special teams player. He started in the first three preseason games in 1988, but completed the season on injured reserves. He was moved to the Raider practice squad, then reactivated for the 1989 preseason before being released following the preseason games. Eric’s professional football career continued with the World Football League, where he started for one season with the San Antonio Riders as a defensive end, then played one season with the WFL’s Ohio Glory as a starting inside linebacker in 1992. Eric is now a defensive coordinator and linebacker coach for the Black Hills High School football team in Tumwater, Washington, and teaches high school math.