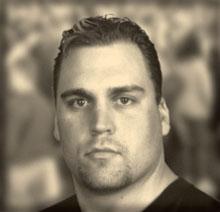 Evan was born in Pittsburg in 1972, but called Antioch his home. His prep career at Antioch High included two years of varsity football under coach Steve San chez and two years of track. He received the Duane Putnam Outstanding Lineman Award as a senior, as well as being named All-League, All-East Bay and All Nor-Cal. Evan attended Brigham Young University in Utah on a full scholarship. At BYU he was an All-Conference lineman – dubbed the Cougars’ “pancake maker” for his blocking successes – and a team captain his senior year, making the Kodak All-America Team. He held the bench press record of 510 pounds at BYU, and was later inducted into its Hall of Fame in 2005 and named to its All-Time Lavelle Edwards BYU Team. The 6’4”, 298-lb. guard was drafted into the NFL in the third round by the Chicago Bears and had a six-season career, playing in 32 games. He played with the Bears from 1995-1997. Evan spent part of 1998 with the Tennessee Oilers, but was traded to Atlanta where he played in 10 games. He was on the team roster in 1999’s Super Bowl XXXIII. Although he left pro football in 2001, Evan got a chance to suit up as a player again when he appeared as a “prison guard” defensive lineman in the 2005 film “The Longest Yard,” starring Adam Sandler.