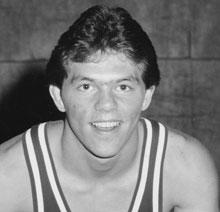 He had a slight physique, but the dominant presence inside Richardson Gym at Antioch High in the mid-1980s was Fred Hunziker, the first California State Wrestling Champion in Panther history. As a junior, Fred took home a fifth-place medal from the California Interscholastic Federation meet. It all came together during the 5’ 11’, 132-pound senior’s last year at AHS in 1985, when Fred’s 41-1 record earned him the title of Diablo Valley Athletic League Wrestler of the Year, Oakland Tribune Wrestler of the Year, North Coast Champion and AHS Male Athlete of the Year. Fred’s lone defeat was due to a disqualification for an illegal hold during a Woodland Invitational match in which he was leading 12-2. What Fred considers his highest honor, and “the icing on the cake” of his high school career, was being the first Antioch wrestler to be named to the USA High School All-America Team. The national recognition made it all worthwhile, after “all the hard work I put into it – all the missed meals, a lot of missed activities” and forgoing most of his leisure time because “I was devoted to wrestling.” Fred’s amazing three years of triumph were not the first in which he had wrestling success. Between 1976 and 1983, young Fred, who represented the Golden State Wrestling Club, was a four-time national champion in his age group for Greco-Roman wrestling, a five-time national champion in freestyle wrestling and a six-time AAU State Champion. In 1977 and 1981 he was named an All-American in freestyle. To honor Fred, the Club has created a perpetual plaque – The Golden State Wrestling Hunziker Award Team MVP – given annually since 1999. When not wrestling, Fred showed speed and agility as a wide receiver in football, for which he was honored by being selected for the First Team All-DVAL and Second Team All-East Bay in 1984. He also played in the Contra Costa vs. Alameda All-Star game and delighted Panther fans by scoring the winning touchdown against Antioch’s football nemesis – Pittsburg. Following his spectacular senior performances, Fred accepted a full wrestling scholarship to Fresno State University, becoming the first freshman in the college’s history to quality for the NCAA Championships. As a four-year varsity starter in the 142-pound class at the Pac-10 Championships and NCAA, Fred accumulated a 32-7 overall record. He competed in the U.S. Open in wrestling, competing against two-time Olympic gold medalist John Smith and defeated two future Olympians in 1989.