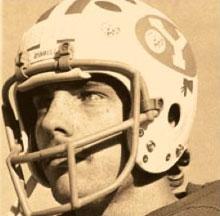 Gary Sheide did not disappoint the hometown fans in 1969, when as a junior, he quarterbacked the Panthers to a 20-0 “Big-Little Game” victory over Pittsburg, the first in 22 years. But that’s not all: Gary’s tip-in with one second left – in the third overtime – clinched an Antioch High basketball victory which was the first court win against the Pirates in 12 years. Gary’s amazing athletic abilities began as a child; he held a Little League All-Star strikeout record, threw a football 60 yards and dunked a basketball – all by eighth grade. He was AHS’s all-time leading scorer, the first person to surpass 1,000 points. He batted .400 in baseball and quarterbacked his football team: both earned league championships. This triple-threat athlete began college at DVC, then moved on to Brigham Young University on a football scholarship. Gary’s career soared in Utah. He was first in a string of six All-America quarterbacks, followed by Jim McMahon and Steve Young. As a college junior, Gary was #2 in passing and #3 in total offense nationwide. By his senior year in 1974, Gary threw for 2,174 yards, including 23 touchdowns. He earned Conference MVP honors; captained BYU to its first ever Fiesta Bowl; was awarded the Sammy Baugh trophy as the nation’s “Best Passer”; named to the All-Conference Academic Team; was UPI Second Team All-America and eighth in balloting for the Heisman Trophy. College career totals: 4,524 yards and 45 touchdowns. Gary seemed destined for a professional football career. He was the second quarterback in the 1975 NFL draft, taken by the Bengals in the third round, but played in only exhibition games before being cut due to injuries, ending a nationally recognized career.