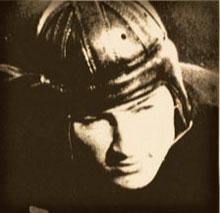 The bone-jarring tackles made by “Bus” Ackerman in the 1920s era of football were made even more impressive by the lack of modern protective gear. Bus graduated in 1927 from Riverview High School, the very building that now houses the Antioch Historical Society Museum and Sports Legends Hall. At Riverview, Bus was both place kicker and tackle and was All-League for four years. In baseball he played centerfield and held the record for most runs scored at Riverview High. His skills as a tackle and place kicker earned him All-League honors and a full scholarship to St. Mary’s College. He played football and centerfield in baseball at St. Mary’s between 1927-1931. He was First Team All-America in football in 1929: the legendary Knute Rockne signed the certificate. Bus was the first All-America player to come out of Antioch. When he wasn’t playing college ball, Bus played on club football teams. He was on the American Legion Football team, coached by Walter “Dutch” Eells, the namesake of Antioch High’s stadium, and in 1928, on a summer break from college, played on the championship American Legion baseball squad. Bus played in the very first East-West Shrine Game in 1929, the same year this early athlete chose baseball after college, spending more than two yeas in the Pacific Coast AAA Baseball League. Bus stayed in Antioch, serving the city as a police officer when his sports career ended. He is enshrined in the St. Mary’s Hall of Fame, where he’s been so honored since 1970. Welcome Home, Bus.