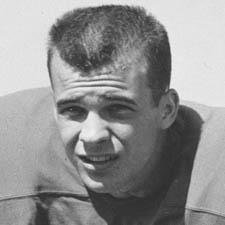 Grover was varsity quarterback at Antioch High for his junior and senior years in 1954 and 1955: a “potent factor” in the Panthers’ most successful football seasons since 1948, coached by Brooks Golden. He scored three touchdowns in one game and made several dramatic 40-plus yard runs in his senior year, which earned a spot on the All-Contra-Costa team. As a junior he was named First Team All-League in basketball and played on the 1953-54 Panther “B” team that won the DVAL championship. After switching to half back and kick returner when he attended what was then East Contra Costa Junior College (which became DVC in 1958), Grover was named First Team All-League. During his time at DVC, Grover scored three touchdowns in a spectacular game against the San Jose State freshman team: a four-yard run, a 21-yard reception and an 80-yard punt return. He was a walk-on for the University of California, Berkeley team in 1957 and 1958, later earning a scholarship. Grover also belongs to a rarified group; as a junior he played in the very last Rose Bowl appearance by Cal. In that storied game against Iowa on New Year’s Day 1959, Grover had four carries for 32 yards, one reception for 31 yards, and nine tackles as a defensive back in the loss to Iowa. Grover’s name still appears in the Pac-10 record books for a 92-yard punt return for a touchdown against Washington State in 1959. He was the top player at Cal for punt returns and kickoff returns in 1959, averaging 17.1 and 23 yards respectively. That amazing Cal team led by quarterback Joe Kapp also beat Stanford two years in a row. Grover was selected to play in the 1959 East-West Shrine Game at Kezar Stadium in San Francisco, led by quarterback Don Meredith, later to be a Dallas Cowboys player and Monday Night Football TV commentator. Following his Cal years, Grover tried out as a free agent for the Los Angeles Chargers in 1960 and played in four preseason exhibition games. Coaching became Grover’s occupation following Cal; five years at Berkeley High and a total of nine years at Merritt College in Oakland for football; four years as head track and cross country coach at College of Alameda, two years coaching golf at Merritt, where his men’s team won the Northern California championship, and 16 years of women’s basketball at Merritt prior to his retirement in 2001.