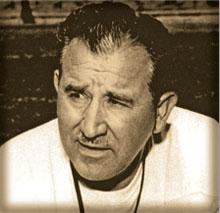 Jack Danilovich’s tenure at Antioch High School was short, but his influence was indelible. “He put Antioch on the map” according to one of his star players, and fellow Sports Legend, Worth Shaw. “This guy put two players in the NFL.” Shaw said that in 1951, three of the AHS boys Danilovich had coached were captains of their respective college football teams. Jack was Panther head football and track coach between 1939-1949, guiding some of the best teams – and players – to ever come out of Antioch. The St. Mary’s College alumni’s first year as head coach was disappointing. His record: 0 wins, 6 losses and two ties. Jack took that dismal season as a challenge, and went on to lead the players to a remarkable record of 75 wins and six losses in 10 years – encompassing a 27-game winning streak from 1944 – 1948 that included AHS’s first undefeated season in 1945-46. Beginning in 1940, Jack’s boys never lost more than one game in a season until 1948, when the record was 6-2. The extraordinary leadership he exhibited earned Jack the honor of being named “Best Coach west of the Mississippi” in 1946. Jack left after the 1949 season to coach at East Contra Costa Junior College, now Diablo Valley College.