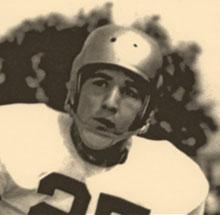 Jack was awarded the Distinguished Service Medal as a Rear Admiral in the Navy, but decades earlier he had earned a chest full of varsity letters at Antioch High – eight to be exact. This four-sport athlete began his prep career in 1947. As a junior, he was chosen for the All-County football and baseball teams. Jack’s senior year in 1950 was a cavalcade of accolades: a unanimous selection for All-County in football and baseball, a spot on the State All-Star Baseball team, and county and North Coast high-hurdle champion. Off the field, Jack served as student body president. Athletics continued to be a big part of his life during his years at the U.S. Naval Academy. Jack played halfback on the undefeated freshman football team, playing both offense and defense. His junior and senior years brought several accomplishments in both football and track. He scored Navy’s only touchdown in the Army-Navy match-up of 1953. Jack was starting halfback on both offense and defense on Navy’s famed “Team Named Desire” which finished fifth in the nation and won the Sugar Bowl in 1955. That year, he was also Navy’s best high hurdles runner. Jack spent 31 years in the Navy, including a tour of duty in Europe and in Vietnam. He was the Navy’s Chief of Information in Washington, D.C. – where he earned the Navy Commendation Medal – and retired in 1986.