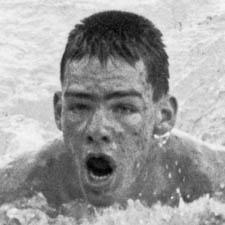 Jack Hannigan is being inducted as an Antioch Sports Legend, but he will forever be remembered as a hero, sacrificing his own life to save his fellow platoon members – felled by an enemy attack in Vietnam. Just three years earlier, Jack was a champion swimmer at Antioch High School. He made First Team All-Diablo Valley Athletic League two years in a row. Jack earned the honors through his multiple record-breaking performances in the 100-meter breaststroke. He was the DVAL champion breaststroker as a junior and repeated the feat as a senior. His first record-breaking performance occurred as a junior in 1961, setting a new AHS mark of 1:13.4, which occurred during the North Coast Division I meet. As a senior in 1962, Jack quickly erased his previous mark and set a new record in the 100-meter breaststroke of 1:09.5, which also set a new DVAL-Contra Costa Division Meet record, besting the previous meet record by almost three seconds. He broke his own record a third time in a meet against Pleasant Hill High School, finishing the 100 meters in 1:09.1. Jack’s tremendous swimming achievements were recognized in several places. The Concord Quarterback Club honored him as its “Athlete of the Week” in 1962, the only swimmer to be honored that year. The Babe Ruth Foundation gave him its Sportsmanship Award. Indiana University offered Jack a scholarship to swim for the Hoosiers, but he declined it, and instead spent a semester at St. Mary’s College in Moraga. By age 19, Jack was swimming for the Santa Clara Swim Club, the nation’s premier training ground for Olympic talent: its swimmers have won a collective 71 medals and produced Olympic champions Donna de Verona and Mark Spitz. With the conflict in Vietnam escalating, Jack went into the Army and was deployed in September of 1965. Just a few weeks after arriving with his platoon, he had some national notoriety when his photo appeared in Life Magazine’s Oct. 22, 1965 issue as part of its coverage of the conflict. He is shown tending to his wounded comrades just after a jungle ambush. Tragically, he was killed in a similar firefight just two weeks later, his family receiving the posthumous bronze star he was awarded for valor.