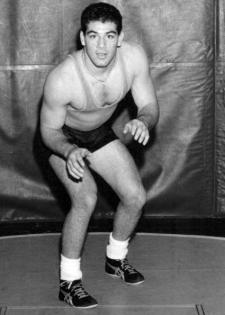 In 1988, the Panthers were the California state champion team, a first for Antioch High. The team’s shining star was Jason Verduzco, only the second wrestler in Antioch High history to be an individual California state champion, grappling in the 165-pound class in his senior year. The ASICS America Corp. named Jason to its ASICS Tiger All-America first team roster in 1988, effectively crowning him the best high school wrestler in the United States for his weight class; the only wrestler on the team from the entire West Coast. Amateur Wrestling News magazine also placed him on its High School All-America Dream Team. Jason’s 41-1 record put him in a class by himself. His only loss occurred during a dual meet in which he was disqualified for a slam. His career record over four years of varsity prep wrestling competition was 160-12. Jason was crowned the Antioch High Male Athlete of the Year, Diablo Valley Athletic League champion, Outstanding DVAL Wrestler, North Coast Section champion, and Oakland Tribune Athlete of the Year in 1988. Jason began Amateur Athletic Union wrestling competitions at age seven and continued for more than a decade. As a sophomore and junior at Antioch High School, he won the DVAL and North Coast titles, then placed second both years at the California Interscholastic Federation State Championships; wrestling at 145 pounds in 1986 and at 154 pounds in 1987. He was first place winner of the 132-pound class as a freshman in 1985 at De La Salle High, which he attended for one year. His aggressive style was obvious in his first year in high school. He told a local sportswriter, “I take ‘em down, let ‘em up… and take down. I’ll keep it up …it gets tiring for me, but it pays off.” Jason is one of the select few athletes with the skills to achieve nationwide recognition in two different sports. When not grappling, Jason was tossing footballs as the Panther quarterback, throwing for a three-year varsity record of 4,107 yards on 300 completions and 29 touchdowns. He starred for the University of Illinois playing on a football scholarship. The three-year starter was named by the school as one of the Top 10 signal-callers in the college’s history. He ranks third on the all-time Fighting Illini list for passing yardage with 7,532 yards and 42 touchdowns and was chosen as an Honorable Mention 1992 All-America quarterback. He led the Illini into three bowl appearances and was two-time team MVP. Jason went on to play one season with the British Columbia Lions in the Canadian Football League and spent six years combined as an assistant coach with the Washington Redskins and with the Kansas City Chiefs under Head Coach Dick Vermeil.