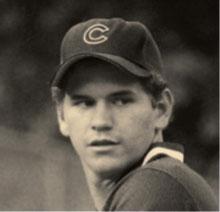 The early 1980s saw Antioch High’s baseball team reach a new height with its North Coast championship in 1984. Leading that team was Jeff Pico. Jeff’s talent was evident in his sophomore year, when he posted a 7-3 season with a 1.53 ERA. The Panthers named Jeff their MVP during both his junior and senior years. The 6’2”, 170-lb. pitcher had a 6-0 record in 1984. The Antioch native, born in 1966, was drafted in the 13th round by the Chicago Cubs, and signed by scout Tom Davis. He played 13 seasons professionally. Jeff’s major league pitching debut on May 31, 1988 against the Cincinnati Reds went down in the Cubs’ record book: a shutout. Tossing a four-hitter, he became the first Cubs pitcher to throw a shutout in his major league debut since Bill Lee on May 7, 1934 against the Phillies. He appeared in 113 games during three seasons in the major leagues – 1988 through 1990 – and had a career ERA of 4.24. His best preseason, 1989, Jeff had an ERA of 3.77 and a 3-1 record. Jeff’s major league career posted a winning lifetime 13-12 record in 295 career innings. Following his playing days, Jeff turned to coaching which he has done since 1994. Jeff is currently coaching in the Arizona minor leagues for the Visalia Oaks. Prior to Arizona, Jeff coached the South Bend Silverhawks and Chico Heat.