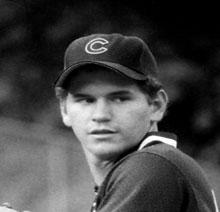 Jeff played 13 professional seasons in baseball, including appearing in 113 major league games in three seasons for the Chicago Cubs between 1988 and 1990. But, the black and gold baseball diamond was where the Antioch High graduate polished his game: he was named an All-DVAL pitcher his senior year, East Bay Player of the Year, All Northern California and honored by AHS as its Most Valuable Player in 1984. He was also MVP at AHS as a junior in 1983. Jeff’s Panther baseball team had a 23-5 season in 1984, culminating with the North Coast Section Championship, played in the Oakland Coliseum. The pitcher shared mound duties with Alex Sanchez, who also became a major league pitcher and is a fellow 2010 Sports Legends inductee. Jeff’s total record for the 1984 season was 10-1 overall, 6-0 in league, with a 1.03 ERA. At the plate, he hit .444 with three HRs and drove in 39 RBIs. Jeff is one of only four players in Antioch High history to have his baseball jersey – #22 – retired. Prior to high school, Jeff played on a Babe Ruth team sponsored by Local 850 of the Pulp and Paper Workers Union. He pitched the final victory game of the Nor-Cal Championships, and then pitched in the Western Regionals in Hawaii. The 6’ 1”, 190-pound right hander was drafted straight out of high school by the Chicago Cubs as a 13th round pick in 1984. “I graduated from high school, then left two days later,” for his minor league assignment, Jeff said. In his major league debut for the Cubs, on May 31, 1988, Jeff pitched a four-hit shutout over the Cincinnati Reds in a 4-0 win, the first time a rookie player had pitched a shutout in his first game since 1934. While in the minors for the Cubs, Jeff had 48 wins and an overall ERA of 3.33, accumulated from pitching nearly 800 innings. His statistics for his major league appearances were; 13 wins, 12 losses, 295 innings pitched and a lifetime ERA of 4.24. After his professional playing days, Jeff worked as a pitching coach for several Class “A” minor league teams; the Yakima Bears, the South Bend Silver Hawks, Lancaster Jet Hawks, the Visalia Oaks and the Double A Mobile BayBears, as well as the independent Western Baseball League’s Chico Heat. Jeff currently works as the roving pitching coordinator for the Arizona Diamondbacks for whom he’s worked since 2003. In this job, he travels the country to supervise all the Diamondbacks’ six farm-team pitching coaches and minor league pitchers. Baseball has been Jeff’s entire life, since he’s spent the last three decades as a player or coach, but he has special memories of his time as part of the 1984 Panther championship team. “I just knew we were good. We had a lot of good athletes and we played well together,” Jeff says. “We found a way to win no matter what we did.”