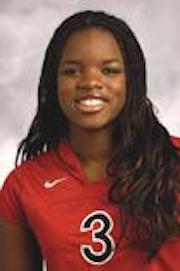 It’s hard to think of high school Girls Volleyball in the City of Antioch without the name Abernathy jumping to the very top. It could possibly mean Antioch Sports Legends Inductee Gabrielle who set volleyball records at Deer Valley High many thought unattainable for future athletes or this year’s Inductee, her younger sister, Jennifer who took her sisters lead and went on to write her own amazing record book story both at Deer Valley and the University of Arizona. Coached by Lou Panzella, this year’s Inductee in the category of Outstanding Coach, Jennifer would go on to become one of the elite women athletes ever to come out of Antioch.
Jennifer is what we at Sports Legends call the very “Best of the Best”. Her spectacular high school career included being named Contra Costa Times Female Athlete of the Year, not once but twice. She was named to the 2nd Team All-State Volleyball Team by CalHigh Sports as a Senior and was a member of the United States Junior Volleyball Team after her Junior year at Deer Valley. Jennifer was the Contra Costa Times Volleyball player of the Year and followed that by being named the BVAL’s Most Valuable Player her senior season. She was a 3-time 1st Team All-BVAL selection and was honored her junior and senior years by being named Deer Valley’s Female Athlete of the Year.
Her high school accomplishments earned her a full ride scholarship to the University of Arizona where today she still ranks as one of the Top-10 volleyball players of all-time on the Wildcat record list in 7 different categories. Jennifer was a 4-time letter winner at U of A and Pac-10 Player of the Week her Sophomore, Junior and Senior seasons. On top of that she was named National Player of the Week during her sophomore season. During her Senior season Jennifer was awarded national honors being named 3rd-Team All-American by the American Volleyball Coaches Association. She capped off her senior season by being named 1st Team All-Pac 10.
Jennifer played two years of professional volleyball for Aguadilla in Puerto Rico and one year for Piacenza, Italy