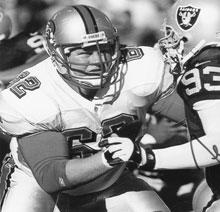 Jeremy, a 1994 Antioch High graduate, had the unusual opportunity to play professional football for both Bay Area teams – the San Francisco 49ers and the Oakland Raiders – keeping his #62. The 6’5”, 315-pound offensive lineman was first drafted in the second round by the 49ers in 1998. His “Power, Toughness and Tenacity” won a place on two Pro Bowl teams in 2001 and 2002 as a center. Jeremy was a starting player in nearly every NFL game in which he appeared. He had a 107-game unbroken stretch of starts within the 120 games he played over an 11-year NFL career that ended with the San Diego Chargers. His work ethic earned the respect of his 49er teammates who chose him as a three-time recipient of the Bobb McKittrick Award as the team’s top lineman in 2000, 2003 and 2005. They also awarded him the The Ed Block Courage Award, given in 2003 and 2005 for playing with severe ankle and knee injuries. Jeremy was born in 1976, the same year his dad, retired Antioch police officer Dave Newberry, lettered at Cal as an offensive lineman. Jeremy was chosen for the All-BVAL, All-East Bay, All-Bay Area, All-Nor Cal and All-Far West teams. As a senior he recorded 11 sacks and was in the top five in the state as a heavyweight wrestler. He later played at U.C. Berkeley on a football scholarship. He had a 93% blocking consistency as a Cal lineman, the highest for any Cal player in the 1990s. On May 22, 2010, former teammates, friends and hundreds of fans attended “Jeremy Newberry Day” at the Antioch Historical Society Museum. Oakland Raider Coach Tom Cable, who was Jeremy’s line coach at U.C. Berkeley, told the crowd that the former Panther was “the best I ever coached… It’s Antioch’s day to honor him, but he’s always honored where he came from.”