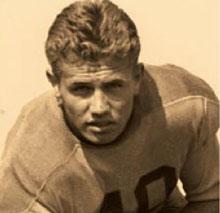 Antioch High’s Student Body President and Salutatorian of 1946 became a star at Stanford and enjoyed a lifetime of college coaching success. As part of the undefeated Sports Legends AHS Football Team of 1945-46, Cone was nominated for All-County First Team honors. Following two years in the Army, he earned both a B.A. and M.A. from Stanford and started four years in football. During his college football career, Jesse was MVP in 1948 as well as Outstanding Member of the undefeated freshman football team; an All-America Honorable Mention in 1951; All-Coast for two years; winner of Team and Coaches’ Award for Outstanding Senior in 1951 and Co-Captain of the 1952 Rose Bowl team that played Illinois. Coaching became Jesse’s vocation after college, first at San Bruno’s Capuchino High School in 1952, then Pomona College between 1953-57, where actor/singer Kris Kristofferson was one of his players. Between 1958-1969, Jesse coached high school and community college players, including Les Shy, who later played for the Cowboys and N.Y. Giants. Jesse stepped up to the challenge of offensive coordinator at football powerhouse Utah State University in 1969, coaching future pro Phil Olsen. Jesse was promoted to Assistant Head Coach at Utah State in 1970. By 1972, he was responsible for coaching one of the best teams in “Aggie” history, named the 15th best team in the U.S. He moved on to North Carolina’s Wake Forest University in 1973; Offensive Coordinator at University of Utah in 1974-76, then at New Mexico State University in 1977. Jesse kept coaching into the late ‘70s and early ‘80s at Turlock High and Merced Community College. By 1994, Jesse headed overseas to Germany as Head Coach for the Hamburg Silver Eagles.