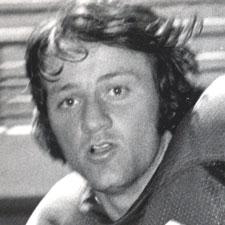 If there’s a gene for Panther football talent, then Jim Boccio, Jr. inherited it, and passed it on. His father, Jim Boccio, Sr. was Antioch High’s co-MVP in 1942 and son Brian continued the tradition as MVP of the 1992 Antioch High team. Jim Jr. was the top back in 1969 earning the prestigious AHS Ron Pritchard Award, later on earning MVP at Diablo Valley College in 1971. Jim was named First Team All-DVAL in high school, scoring 10 touchdowns his senior year, placing him at fourth in the league with his overall total of 62 points. One of his best performances was in the 20-0 shutout of Pittsburg in the 1969 “Big-LIttle Game,” where he scored two TDs and intercepted a pass to end Antioch’s 22-year losing streak in the historic cross-town rivalry. The NorCal Chapter of the National Football Foundation awarded Jim one of its scholarships and Fitzpatrick Chevrolet named him the top high school athlete in the county in 1969-1970. When not playing football, Jim earned an overall MVP award in track for his performance in the hurdles, long jump, sprints and relays. Jim was a walk-on player at the University of Southern California and played three games with the freshman team. He came back home for his sophomore year and attended Diablo Valley College where his 14 interceptions earned recognition as the Golden Gate Conference Defensive Player of the Year in 1971. Jim’s amazing performance at DVC – #1 in the nation in total return yardage for interceptions, kickoffs and punt returns – gained notice from Utah State University, which lured him away with a full scholarship. He played for Utah’s 9-2 “Team of the Century” in 1972 and is credited with 45 tackles (20 solo and 25 assists). A broken collarbone caused Jim to redshirt in 1973, but he was back and running in 1974. Jim left Utah with some amazing football experiences and two degrees; a B.A. in zoology and M.A. in biology. He later earned a doctoral degree from San Francisco in podiatry. He helped coach AHS football in 1990 – 2002 and currently has a practice as a podiatrist in Antioch.