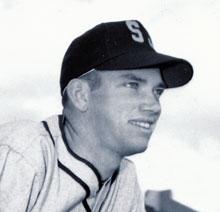 If anyone can lay claim to the title of “King of Antioch High” it would have been Jim Coalter in the 1940s. The Student Body President won eight varsity letters, excelling in nearly every sport in which the Panthers fielded teams. During the 1948-1949 school year, the 5’11” senior was First Team All-Contra Costa County for his performance as a football halfback and fullback. In a nine-game season, #33 scored 59 points; nine touchdowns, threw two touchdown passes and kicked five extra points. Once the gridiron season was done, Jim played basketball as a starting guard for two years, earning recognition as an honorable mention All-County team member in 1949. Without skipping a beat, Jim headed out to the diamond to serve as team captain and starting shortstop for the newly organized baseball team coached by Babe Atkinson, who brought the sport back to AHS as an interscholastic event following a many-year hiatus. The inaugural Panther baseball team had a second place league finish during Jim’s junior season, but he enjoyed the triumph and “great honor” of captaining his teammates to a League championship his senior season, while helping turn 15 double-plays with teammate Bob Ehrlich. That 1949 baseball championship remains a special memory for Jim, even after 60 years. Before the bats and balls could be put away, Jim sprinted off to the track, where he was a relay runner in the 440-yard dash and broad jumper, placing third in the county championship meet. He posted a career best of 20 feet,10 inches in that event. Following graduation, Jim played left field and third base at Modesto Junior College for two seasons, then played basketball for one season at East Contra Costa Junior College (now DVC), before transferring as a starting left fielder at San Jose State College (now called California State University, San Jose) where he played baseball for two years – 1953 and 1954. Once his education was complete, Jim continued as a competitive athlete in the United States Army; he led the Army baseball team to two league championships in Japan. When his service to Uncle Sam was complete, Jim came home to Antioch, where he spent 12 years on the Antioch Recreation Commission and had a three-decade career with DuPont.