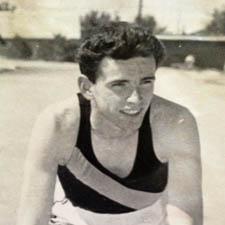 As more technologically advanced athletic equipment and training methods are developed, running records have been shattered in the 21st century. Joe Bonanno’s Antioch High record still stands after nearly five decades. Since 1964 the panther runner’s time in the 440-yard dash still remains as the fastest by any Antioch High athlete, and was fast enough to place him second overall in the 1964 Northern California standings. He beat San Jose ‘s Lee Evans at the North Coast Section Finals, winning the event with a time of 48.5. Evans came in second in that event at 49.0, but would go on four years later to win a gold medal in the 400 meters at the 1968 Olympics, shattering the existing world record. Joe was honored with an “Athlete of the Week” award for his performance at North Coast by the Tri-Club Boosters (Pittsburg, Antioch and Concord groups combined). Joe’s 48.5 at the NCS Finals was the second time he broke the school record, shaving a full second from the first record, which he had run one week earlier at the NCS Trials. What makes Joe’s victories so remarkable is the fact that he barely made it to North Coast at all. After a disappointing fifth place finish in the Diablo Valley Athletic League Finals, he “worked out like mad, his guts and determination paying big dividends,” according to a story by former Daily Ledger Sports Editor Bill Boyer. An Oakland Tribune sportswriter reported that while “no one was paying attention,” Joe ran a “blistering 49.5,” breaking an AHS record set by future Antioch Sports Legend inductee, Mac Enz. Joe ran varsity track all three years in Antioch, beginning as a sophomore in 1962. He became track and field team captain as a junior and tied the AHS record in the 100-yard dash running 9.9 seconds, and placed first in the All-Contra Costa League with 10.0 flat in the 100-yard dash and a wind-aided 21.7 in the 220, leading to a local newspaper sportswriter to crown him Antioch’s “Sprint King.” At 15, he placed 4th in AAU Junior Olympics competition in the Bay Area. Serving again as team captain in his senior year, Joe tied his own school record for the 100-yard dash. During a meet against Pittsburg, Joe bypassed competing in the 100 event and ran the 440 for the first time. His 51.3 broke an existing school record held by Eddie Savage, a 2008 inductee into the Sports Legends Hall of Fame. The East Bay Prep Writers Association named Joe the Contra Costa Track Athlete of the Year, chosen from among prep stars from 58 schools. Colleges took notice. Joe received letters of interest or scholarship offers from Idaho State, Utah State, University of Washington, San Jose State, Southern Illinois State, Northwestern, Oregon and Washington State. Joe accepted the offer from Utah State, where the long-time sprinter performed another amazing feat. He broke a Utah State record in an event that he had never run in high school – the 440 intermediate hurdles. It was déjà vu for Joe during his junior year at Utah; back to back record – breaking performances. Joe broke the Aggie record in the 440 intermediate hurdles with a time of 54 seconds, and then broke his own new record at the Utah State University Invitational by shaving .3 seconds from the previous week’s mark. Prior to competing for the Aggies on a full scholarship, Joe” had never hurdled a hurdle except in fun,” according to his college coach. Following graduation, Joe embarked on a 38-year teaching and coaching career at Bella Vista High School in the San Juan Unified School District near Sacramento. At Bella Vista Joe wore many hats, teaching human anatomy and physiology while serving as the head varsity football coach and assistant track coach.