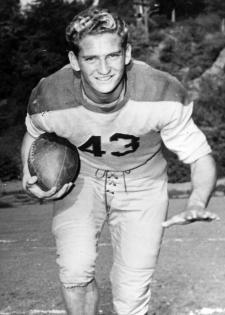 One-high-school towns often elevate their football players into local heroes; their gridiron achievements living on for decades, preserved in local folklore. One such local sports hero was Joe Harlan. Tragically, he died in 1950 in an industrial accident in a local mill. Antioch’s City Hall was closed to allow all city workers to attend his funeral. Joe was only 20. During the short time he played, the Oklahoma-born kid called “Tulsa Joe” recorded a list of accomplishments that propelled Antioch High to two undefeated football seasons and 20 consecutive wins over three seasons before the streak ended. During his sophomore year, the Panthers went 10-0, scoring 364 total points while allowing only 77 from their opponents to win the Contra Costa Athletic League title. AHS went undefeated again in 1946-47 during Joe’s junior year. He had an injury-plagued season, but managed to rush for six touchdowns and still led the league in scoring with 37 points. During one dramatic win against Acalanes High, Joe carried the ball 15 times for a total of 159 yards and two touchdowns. In another key game, his Panther teammates made key blocks as he dashed through a line of Red Devils in a 71-yard touchdown run that led to a 12-0 shutout of Mt. Diablo High. Joe was selected to the All-CCAL First Team roster as a fullback, the first time a team was officially selected. During the 1947-48 season, the 165-pound running back was unanimously chosen First Team All-CCCAL again for his league-leading statistics; eight touchdowns, 13 kicked points and 61 total points scored while playing three different positions: quarterback, fullback, kicker and defensive stand-out. His teammates selected Joe the co-winner of the football MVP award and Coach Jack Danilovich chose him as a team co-captain. Antioch produced many great football players, but Joe has a special place within the heart of old-timers. He has the distinction of scoring three touchdowns over three consecutive wins against archrival Pittsburg High. The storied Big-Little Game annual match-ups between the two East Contra Costa athletic powerhouse schools attracted thousands of spectators, filling the schools’ stadiums to capacity. As a sophomore in the 1945-46 Big-Little Game, the left halfback rushed for a touchdown in a 38-7 victory; as a junior, his 74-yard rushing TD was a component of the 13-0 shut-out of the Pirates; as a senior, the Pirates were again shut-out 19-0, with Joe contributing a 31-yard TD run. Joe was the second leading hitter and co-captain for the Panthers’ 1948 baseball team as well, chalking up a batting average of .375. Joe was also an ace pitcher, who struck out 10 batters in the final 6-2/3 innings to defeat Alhambra High 3-1, sharing a no-hitter with Chuck Stapleton, later to become the namesake of a county track meet in his honor. Joe, in between baseball games, ran track, winning the Contra Costa County 120-yard high hurdles championship with a time of 15.9 seconds. Following high school, Joe served 18 months in the U.S. Navy as an airplane mechanic and played football with a semi-pro team in Florida. Following his death, the Joe Harlan Memorial Trophy was created in his honor and presented by the Antioch Quarterback Club.