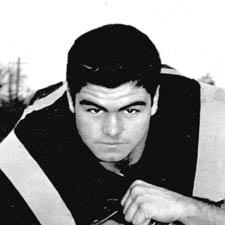 This powerful tackle helped the Antioch High School football team to a 7-1-1 record in 1962, ending a 15-year league championship drought for the Panthers. John’s job was to keep the other teams from advancing, and he did it well, performing on both offense and defense. The Panthers kept their opponents to a total of only 38 points all season. During the nine-game league season, John says he “pretty much never left the Field.” Dubbed Antioch’s “anchor in the storm” in local news accounts, John was instrumental in keeping three opponents from scoring; out of the seven wins AHS achieved, three were shutouts. The hard‐fought 6‐6 tie game was against Mt. Diablo; John, along with guard Tim Bastian, held the line heroically in the last few seconds of the game on the Panther four‐yard line, not once, but twice, preventing a Red Devil win. John also recovered two fumbles in the game. His senior year performance earned recognition as First Team All‐Diablo Valley Athletic League -Contra Costa Division. The Antioch Ledger’s sportswriters, when compiling their “Cream of the Crop” team in 1967, recognized the 6-0, 200-pounder as one of the best tackles in Panther history, placing him on the First Team Offense. The “Cream of the Crop” team was made up of the best Antioch High School players between 1950 and 1967. John was also a key contributor as a sophomore on the Junior Varsity team. At the annual Quarter Back Club awards banquet, he was awarded the JV MVP trophy. The QBC also singled out John during his junior year for numerous tackles and assists, as well as a fumble recovery, against Liberty High: John’s work enabled the Panthers to shut out the Lions with a 45‐0 victory. John received a full‐ride scholarship to Utah State University, where he was on the team for two years. The scholarship was presented to John personally by Head Coach Tony Knapp, who said only 20 scholarships were awarded for football that year, with two of those going to AHS students; John and Ron Edwards, a 2007 Antioch Sports Legends inductee. John’s first year at college saw little playing time due to injuries. He was again injured as a sophomore, which ended his football career. John returned to Antioch to attend the California Highway Patrol Academy and served five years in the CHP. He then spent the next 33 years with the Bay Area Air Quality Management District prior to his retirement. John joins his late wife Jill Joseph as an inductee into the Sports Legends. Jill, who was honored posthumously in 2011 as a community leader, met the Panther football player when she was an Antioch High School cheerleader.