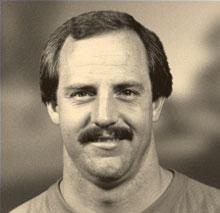 John came up through the ranks of Antioch youth football, playing at Antioch High between 1970-1973. He was MVP and team captain on the league champion Panther team, and was chosen for both Offensive and Defensive All East Bay Teams. His prep football career was capped by playing in the North-South Shrine Game at the L.A. Coliseum. Before graduating in 1973, John placed first in the DVAL shot put and was MVP at the Stapleton Relays. Before earning a B.A. from Stanford in 1977, John was the only non-scholarship freshman elevated to the varsity team for the “Big Game” against Cal. At Stanford, John competed in shot put and discus, while playing inside linebacker and special teams in football. After graduation, John played linebacker for the Canadian Football League’s Montreal Alouettes. He was a starter in the CFL Eastern Finals and played in the 1978 Grey Cup game. John came back home to Antioch in 1980 to play for the Antioch Hornets, earning MVP. The Kansas City Chiefs signed him in 1981 for special teams. In 1982 John played for the Chiefs during a strike-shortened season and was in the last game ever played at Metropolitan Stadium. John was inducted in 1988 into the American Football Association Semi-Pro Football Hall of Fame.