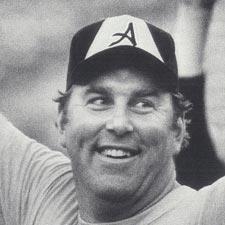 One local sportswriter called Panther Baseball Coach John Whitman’s 16-year tenure from 1982-1998 a “dynasty.” His career speaks for itself; a 327-109 overall win-loss record that includes 20 post season wins, 14 North Coast Section appearances, eight league titles and three North Coast Section Championships; 1984, 1994 and 1995. His personal accolades are numerous. Among them; a 2001 State Senate Resolution for his success on the field and in the classroom, presented by Jack LaLanne and sponsored by then-State Senator Tom Torlakson; three time Lesher Publications’ Contra Costa County Coach of the Year in 1984, ‘89, and ’95 and the Oakland Tribune’s East Bay Coach of the Year in 1985 and ’95. He was selected to coach the Northern California High School All-Stars in 1995 that swept the South in a three-game series in Fresno. In 1994 Whitman was selected as the North Coast Section Baseball Honor Coach, and also received the American Baseball Coaches’ Association’s prestigious District 8 Western States Coach of the Year Award. In 1993 Coach Whitman was selected by Major League Baseball International to coach the Czech Republic’s 13-year-olds’ National Baseball Team at the European Games in Italy. The Czech team was successful in receiving its first international medal at any level. His 1995 AHS baseball team was the most heralded. It was BVAL, North-Coast Section, Northern California and California State champions. USA Today also ranked it #5 nationwide. Coach Whitman arrived on the Antioch campus in 1979 to originally build a boys basketball program. He considers one of his proudest accomplishments as leading the 1984 boys Panther basketball team to its first ever North Coast Section appearance. The Panthers defeated Pittsburg an unprecedented three times, then gained an at-large berth in the North Coast Section tournament in 1984. After fulfilling his initial commitment, Whitman coached the Panther girls’ volleyball team in 1988 to a winning season. In 1994 he coached the female hoopsters to a second place DVAL finish with a 23-6 record and a second place NCS finish after earning an at-large berth to compete. At least 15 of his baseball players were drafted by Major League clubs, with Jeff Pico, Alex Sanchez and Aaron Miles making it as major leaguers. Whitman has conducted and spoken at baseball clinics throughout the U.S., Canada, and Europe. Antioch High honored Coach Whitman with a jersey retirement ceremony on April 29, 2006. He is now retired from teaching and occasionally coaches in Arizona, where he lives with his wife, Cheryl, a retired AUSD teacher.