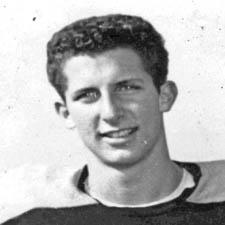 From the time he was junior in 1959 at Antioch High, Jon Fontana was a varsity starter on the football team – on both offense and defense. The gifted athlete was actually a quadruple threat; he played first base and centerfield on the baseball team and was a high jumper and broad jumper in track. The 180-pound 6-footer became a First Team All-Contra Costa County guard and Antioch High MVP in basketball, however his accomplishments were the greatest in football. An Antioch Ledger clipping describes Jon as being able to “hold a casaba (melon) in one hand.” Perhaps that was a contributing factor to his success in two sports that require mastery of manipulating large orbs. As a senior in the 1960 season, Jon had scored the most touchdowns of any Panther (5) and had 19 receptions for 346 yards, earning a Contra Costa Athlete of the Week award. The Concord Quarterback Club honored the Panther as its Athlete of the Week in a game against Clayton Valley High; Jon had four receptions for 73 yards and helped his team win 20-6 against the Eagles. The team co-captain was also MVP of his football team, earned First Team All-League and was the only Antioch High player chosen for First Team All-Division. He was later named to the First Team All-Metropolitan. Jon was one of three Contra Costa prep stars invited to play in the prestigious Shrine California Classic in 1961, a charity game that pitted the best high school players from Northern California with the best from Southern California, played in the L.A. Coliseum. An especially high honor came when he was listed as an Honorable Mention All-American by the Sporting News national sports weekly magazine. The honor was bestowed by an organization called the “Wigwam Wisemen,” a creation of the Oklahoma City University Athletic Director, for the purpose of identifying the best high school football players in the United States. Players were chosen annually by 134 sports editors around the country beginning in 1947. Jon said his happiest memory is winning the Antioch Chamber of Commerce “Perpetual Silver Cup Trophy” for Best Football player. The Silver Cup trophy had been awarded since 1937 but had mysteriously disappeared for two years. It resurfaced in 1961 and was bestowed upon Jon. In hindsight, it became clearer that Jon’s skills stacked up nicely with the top prep stars of the subsequent decade. In 1967, the Antioch Daily Ledger selected Jon as its First Team Offensive End for its “Cream of the Crop” Team – made up of Antioch High School prep stars who played between 1950 and 1967, when area sportswriters created the local dream team concept.