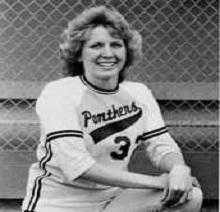 The 1980s produced a bumper crop of talented athletes at Antioch High. Standing out among them is Karen Christianson, who with her twin sister, Sharon, led the Panther softball team to the Panther girls’ first North Coast Championship in 1984. As team captain for both softball and volleyball, Karen set the bar high for athletic leadership and performance. The 5-foot-9 athlete began her contributions to AHS as a sophomore in 1982. She played volleyball as well as junior varsity basketball and was catcher on the 1982 DVAL Championship softball team. She continued as a three-sport athlete as a junior in 1982- 1983, playing varsity volleyball on the DVAL championship team that posted an overall 16-6 record and went on to NCS competition. She was the leader of two outstanding varsity teams as a senior: volleyball and softball. The Panther volleyball squad ended the season 21-7-3 qualifying for a berth in the North Coast tournament and Karen was named to Second Team All-DVAL. Coach Steve Earnhardt said she was instrumental in one standout game against Northgate in which her 12 kills made all the difference in the Panther win. The Lady Panthers’ home plate defender was no doubt a key part of the softball team’s phenomenal 28-1 season in 1984. The catcher’s clutch 2-out, 2-run single vaulted the Panthers to a 2-0 victory over San Ramon and sent the team to the NCS championship against Montgomery High of Santa Rosa. Her crucial hit earned kudos from the Big “C” Athletic Club, which named her as its female Athlete of the Week in Contra Costa County. She also had a base hit in the NCS championship 1-0 victory over Montgomery. Her solid batting and catching led to Karen being named to the All-North Coast Tournament team as well as the All-Tournament Team for the St. Vincent Ferrer Softball Tournament in Vallejo. Karen’s league batting average of .300 during her senior year led to being selected for Second Team All-DVAL honors. She was given the Coach’s Award from Head Coach Andria Edwards for her outstanding contributions to the team and received a scholarship from the Antioch High School Athletic Boosters. Sacramento City College was the next stop in Karen’s athletic career, where her softball skills only improved when she switched position to first base. In her final year there in 1986, she had a batting average of .420 and knocked in 33 RBIs. Her team won the Camino Norte Conference championship and was third in state play-offs. Karen was selected to the California Community College Coaches’ Association All-State Team and the All-Region Team. Those amazing community college stats earned Karen an athletic scholarship to California State University, Sacramento, to complete her final two years of college. At CSUS, Karen led the Hornets to the NCAA regional finals for both her junior and senior years, hitting .304 and serving as co-captain as a senior. In 1988 she was one of three Sac State players to be named to the NCAA Division II All-Region Team and was on the Division II All-America Second Team, as well as making the Sacred Heart Tournament All-Tourney Team in Connecticut. In 1988 the Hornet team finished 57-12, which set a school record for most victories, and finished the season ranked fifth in the United States among women’s Division II softball teams. As co-captain, Karen’s senior year performance on the team included a .289 average, with 33 runs, four doubles, four triples, 19 RBIs and 14 walks, striking out only five times in 226 at-bats while leading the team with 10 stolen bases.