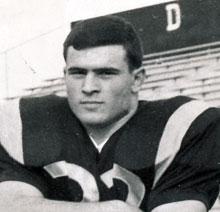 The 5’ 9”, 195-pound fullback was top vote-getter in the selection process for the Antioch Ledger’s “Cream of the Crop” 1950-1967 First Team in which Sports Editor Bill Boyer asked 22 prominent local sports experts to select the most outstanding gridiron stars who attended Antioch High from the 1950s through 1967. Once the 1960s were over, Larry was again placed on the First Team of the Ledger’s All-Decade Team of the 1960s as the top fullback. What brought the 1967 AHS grad to prominence was the dedication he had to conditioning and training and his “focus on winning,” according to Coach Bill Snelson. Larry scored 16 touchdowns his senior season and rushed for 1,176 yards, averaging 6.32 yards per carry. He led the 1966-67 squad to a Diablo Valley Athletic League Championship-winning 8-0-1 season, the first Antioch team to win the league title since 1947. In perhaps the most memorable game of the season, a 13-13 tie with the Pittsburg Pirates, the #32 back had 29 carries for 99 yards and one touchdown. A game against Ygnacio Valley was Larry’s best rushing performance; 233 yards on 31 carries and two touchdowns. The panther athlete was selected All-DVAL, All-East Bay (chosen unanimously), All-Metropolitan and All-Northern California. The Panther team honored its co-captain as the Most Valuable Player. Larry capped his high school career as the starting fullback in the Contra Costa – Alameda All-Star game, where he scored a touchdown. He was awarded a certificate from the Northern California Chapter of the National Football Foundation and Hall of Fame as a “Scholar-Citizen-Back.” Larry left Antioch in the fall of 1967 for the University of Oregon on a football scholarship. He later transferred to Diablo Valley College where the bruising fullback helped the Vikings to an 8-1 Golden Gate Conference Championship. While at DVC Larry was the leading conference scorer with 15 touchdowns while rushing for 766 yards, including one game against Contra Costa College in which he scored three touchdowns in a 33-0 victory. The Viking Co-Captain was selected as his team’s Outstanding Back and named Most Inspirational. DVC Coach Sam DeVito, in an interview, called Merlini “the best inside threat in his 10 years of coaching.” Larry finished his competitive football career on a scholarship to San Jose State, where he scrambled for a 20-yard touchdown in a game against football powerhouse Stanford.