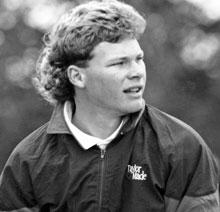 He was selected by the Golf Coaches Association of America two times as a First Team All-America player at the University of Arizona, in 1987 and 1988, the first time any athlete from Antioch has become an All-American twice. Baseball earned him early glory representing Antioch as a catcher on the Babe Ruth State Championship team in 1981. His teammates, Jeff Pico and Alex Sanchez, went on to professional major league baseball careers, but Larry followed a different path – down the fairway instead of behind the plate – becoming the most successful professional golfer to come out of Antioch. Larry played high school JV baseball but focused on varsity golf at Antioch High as a senior. During that 1983 season, Larry’s accomplishments included shooting a 3-under par 70 to lead his Panther teammates, coached by Joe Gambetta, to a 7-stroke victory in the Diablo Valley Athletic League Invitational. He was also the top medalist in the Foothill Athletic League Tournament. In 1984, Larry began play at San Jose State on a golf scholarship, where he won the PCAA conference championship in his freshman year. He then transferred to the University of Arizona in 1985 where he won five individual golf title matches during the remainder of his college career. In 1988 he won the Pac-10 Conference title and was voted Pac-10 Player of the Year representing the Wildcats with a stroke average of 71.60. Larry was inducted into the University of Arizona Sports Hall of Fame in 1993. He made his Professional Golfers Association debut on Jan. 22, 1989 at the Phoenix Open. His pro career included qualifying for 157 PGA tour events; placing in the top 25 sixteen times and in the top 10 four times. The year 1991 brought his first PGA victory, shooting 14 under par with a sizzling 63 on the final day to win the Deposit Guaranty Golf Classic, collecting the biggest payday of his career – $54,000 – and the realization of a career goal. In an interview following his tournament win, Larry said “I’ve been dreaming of that 8 to 10-foot winning putt since I’ve been on the tour.” He achieved it by sinking an 8-foot birdie on the first hole of a three-way playoff to clinch his first PGA victory. Larry remains involved in professional golf as a player support representative for Scotty Cameron Putters, traveling to PGA tournaments throughout the United States, and is married to a former University of Arizona women’s team golfer. Although he made Arizona his home after college, Larry has a special love for his hometown. “I would also just like to say a special thanks to the Antioch community for their fantastic athletic programs, without which I may never have traveled down the path that I did.”