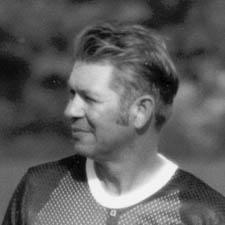 What compels a person to devote most of their free hours to helping kids, with very little offered in return, other than an occasional “Thanks, Coach?” LeRoy Murray, who has spent four decades as a volunteer for recreation and school teams, does it for the love of the game. In an Antioch Daily Ledger feature article written about him two decades ago, Murray paused to consider why he still shows up on Antioch playing fields, season after season: “I love the youngsters, and I love baseball… I get involved with these kids, and I just can’t give it up.” Murray certainly never gave up on the youth of Antioch. He was a manager for Antioch Little League Baseball for 20 years, leading the Beswick Bears between 1969-1990, taking the boys to eight championships. Squeezed into those years was three years as assistant to Coach Kerry Morelli with the Antioch Babe Ruth League. During that time, the 15-year olds’ All- Star team placed second in Western Regional competition in Arizona and was California State Champion. Between 1983-1994, Murray was involved with yet a third group, restarting Antioch American Legion Baseball and serving as a team manager. He also coached for a fourth league, the Antioch Colts, for one year in 1982. Coach Murray grew up on a farm six miles from the Canadian border in Washington State, where he went to high school and college. He began teaching in 1960 in Bellingham, Wash, where he spent three years as Head Varsity Football Coach. He relocated to California in 1966, teaching and coaching one year in Banning, then another in San Leandro before coming to Antioch in 1968, coaching 7th and 8th graders in basketball at what was then Antioch Junior High, where he taught math for 29 years. He spent 1972-1983 as the Antioch Junior High head football coach, winning five championships. The Antioch Junior High School Parent- Teacher Association recognized his efforts twice, in 1980 and again in 1987, when he received the award for service to children and youth. His players were also grateful. He received a plaque in 1996 from the Antioch High Panther baseball team: “In appreciation for your countless hours given in molding the youth of Antioch through your coaching efforts on the diamond. The AHS baseball program owes much of its success to your tutelage and tireless effort.” Coach Murray was also involved with the 1984 North Coast Champion Panther baseball team, being inducted this year into the Antioch Sports Legends Hall of Fame. Once Deer Valley High was built, Murray assisted Head Baseball Coach Dennis Luquet in building a strong squad that produced several stars who went on to play on Double-A or Triple-A Minor League Baseball teams. He was assistant coach for the DVHS North Coast 3-A champions in 2003. Coach Murray’s carefully kept records over the decades contain the names of at least 27 young men who signed minor league baseball contracts after playing for one of his teams. Three Antioch Sports Legends who reached the Major Leagues – Jeff Pico, Alex Sanchez and Aaron Miles – can say that Coach Murray was part of their lives when they played Little League or prep baseball. Nowadays Coach Murray may be preparing the next “Antioch to the Pros” inductees of the 21st century. No rocking chair yet for this grandfather of nine and great-grandfather to six. Although long retired, he’s still happiest on the diamond, 44 years later.